Buggin in the Top End

Buggin in the Top End is a Macro Photography report by Callum Munro who is based in Australia’s Northern Territory.

“Hi I’m Callum, In my blogs, I’ll talk a little bit about some of my macro photography adventures around Darwin in the Northern Territory, and share some of my favourite images. I’m incredibly lucky to live in a part of Australia that’s home to a massive variety of weird and wonderful invertebrates. I truly believe that when it comes to macro photography, you simply can’t beat the tropics.” 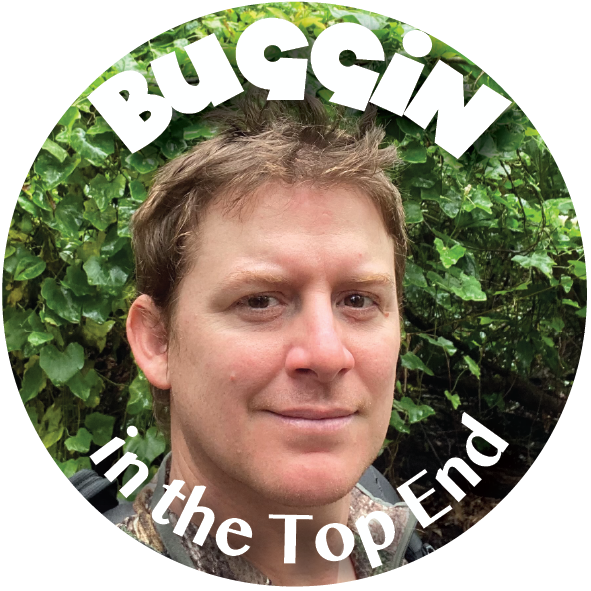 Located 30km southeast of Darwin city, the aptly named Bees Creek is a haven of scrubby woodlands, creeks and the occasional swamp. This environment is perfect for all manner of fascinating critters, and among them are some of my absolute favorite subjects to photograph: bees (native and otherwise.) So it’s fitting that my first Blog is about Bees Macro Photography!  The best part is that I almost never have to venture outside of my own garden to find a variety of species. Often of an evening I can just walk out my back door a few metres and find these incredibly photogenic Blue-banded Bees (Amegilla cingulata) at rest after a hard day’s foraging, their mandibles clamping them in place on the woody twigs of various shrubs. Just as well for me, as they’re extremely difficult to try and shoot during the day. They fly ridiculously fast and only stop for a fraction of a second at a time to feed! 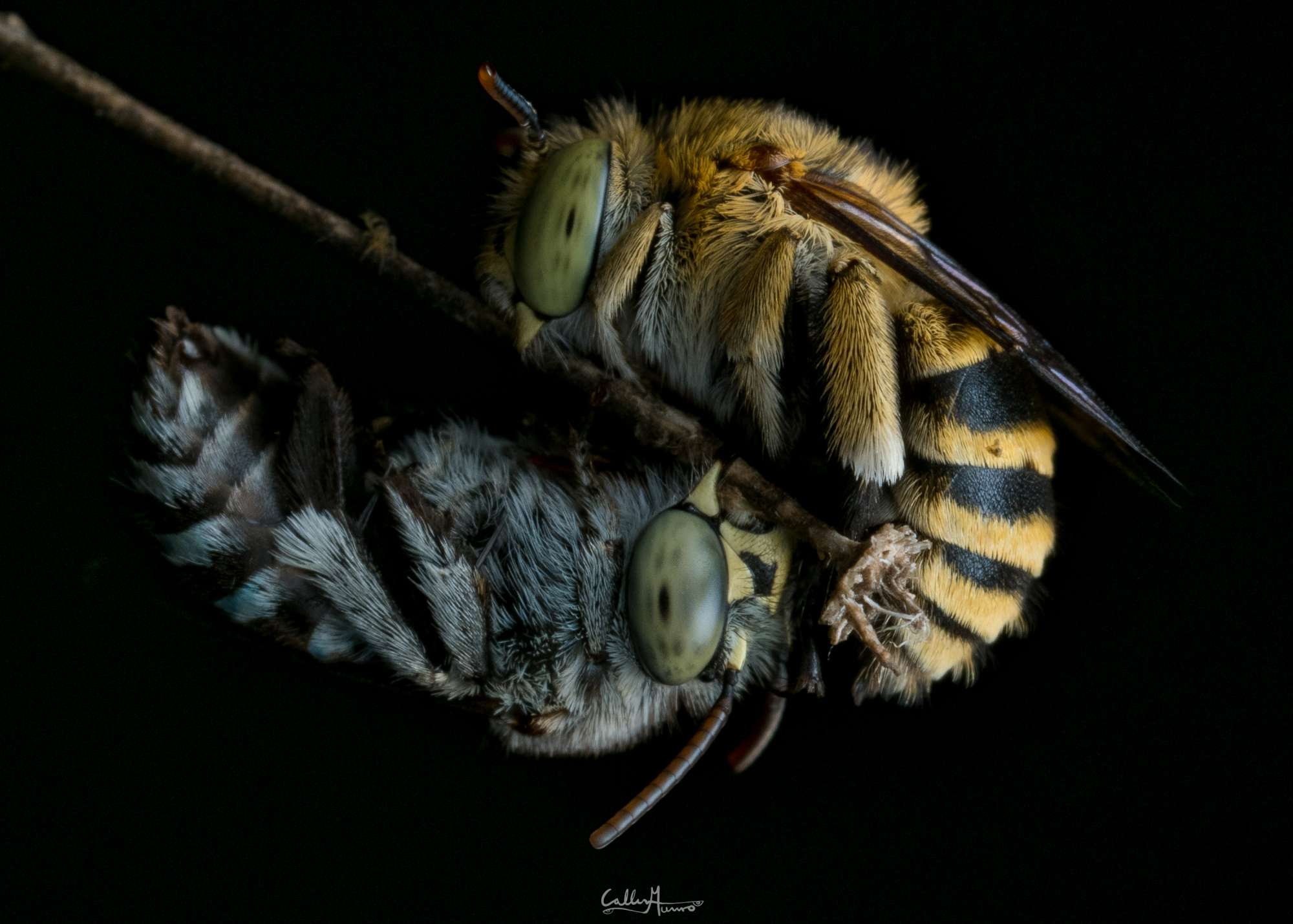 If I’m really lucky, occasionally I’ll find one of these stunning Neon Cuckoo Bees (Thyrius nitidula) on the same shrub as the “blue bands.” Being solitary insects, they’re quite rare, and I’m doing well if I find more than one or two in a year. Fun Fact: the Neon Cuckoo Bee gets its name from the fact that it will stealthily invade the nests of other bee species and lay its eggs, and its offspring will be fed and protected by the host parents, much like the behaviour of cuckoo birds. They truly are beautiful little parasites! 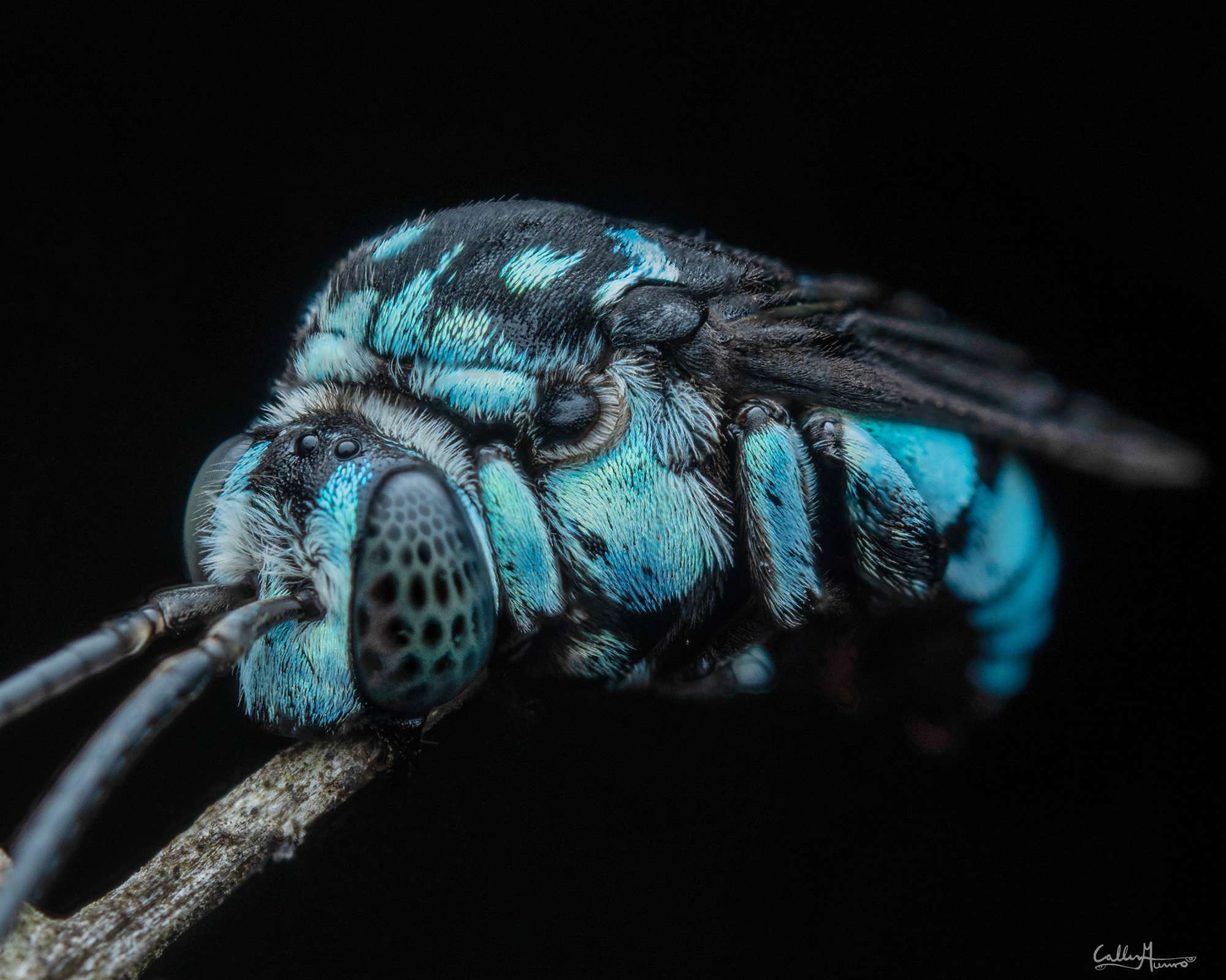 Another ideal time to find sleeping bees is early in the morning. On cooler mornings during the dry season (that’s autumn and winter to southern folks) they can still be found roosting just before the sun appears over the tree line. It was on such a morning in June that I found this little cluster of native stingless bees (Ctenocolletes species) huddled together on a piece of spear grass in the backyard. I would presume that they’re not hive dwellers, and congregate like this overnight for safety and warmth in numbers, but I know very little about this genus, and won’t pretend to sure of their reasons. I know it’s a bit of a faux pas to anthropomorphise insects, but the image of the two of them huddled together as if in conspiratorial discussion is just too much cute, and remains one of my favourite photos to date. 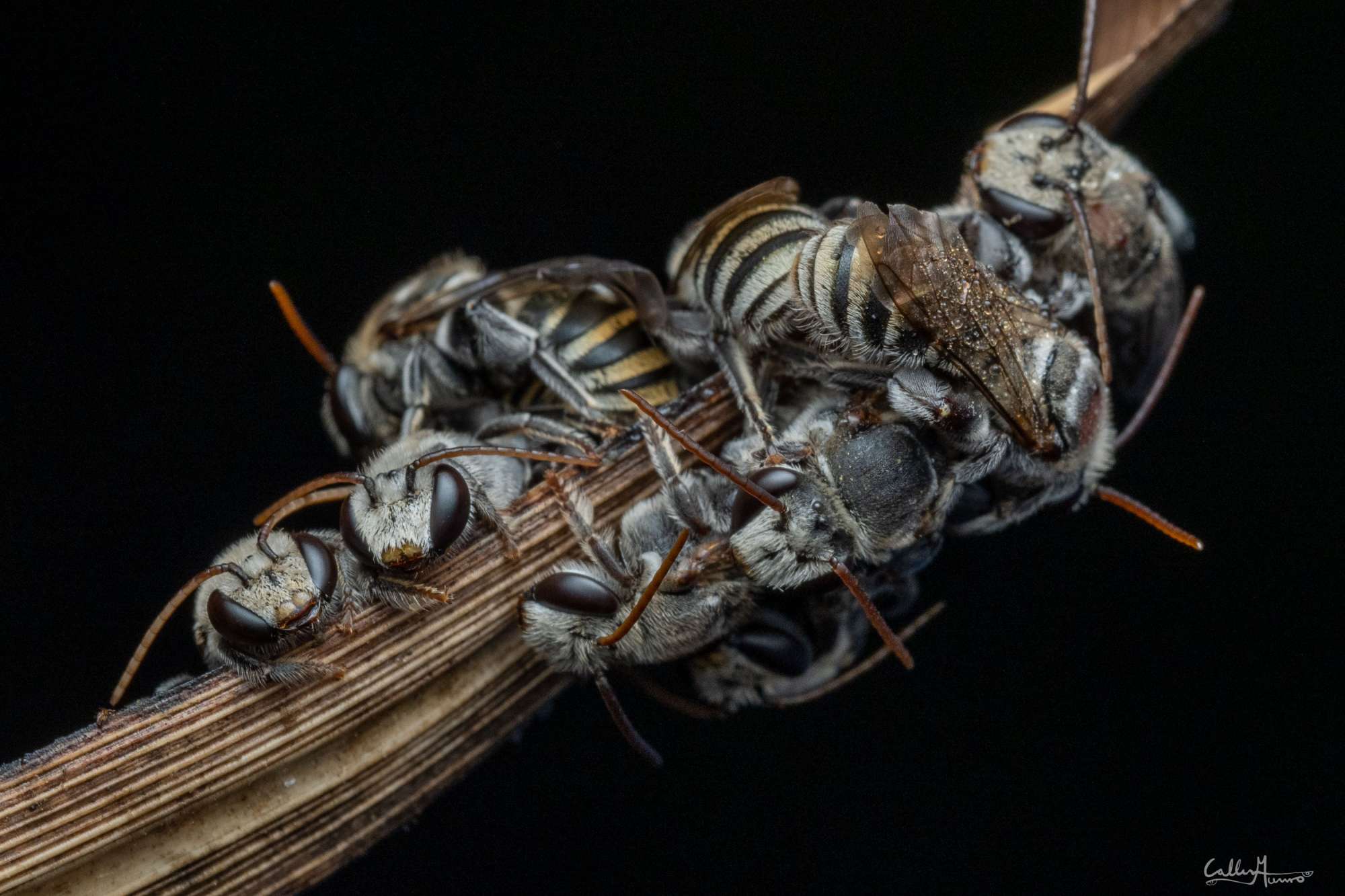 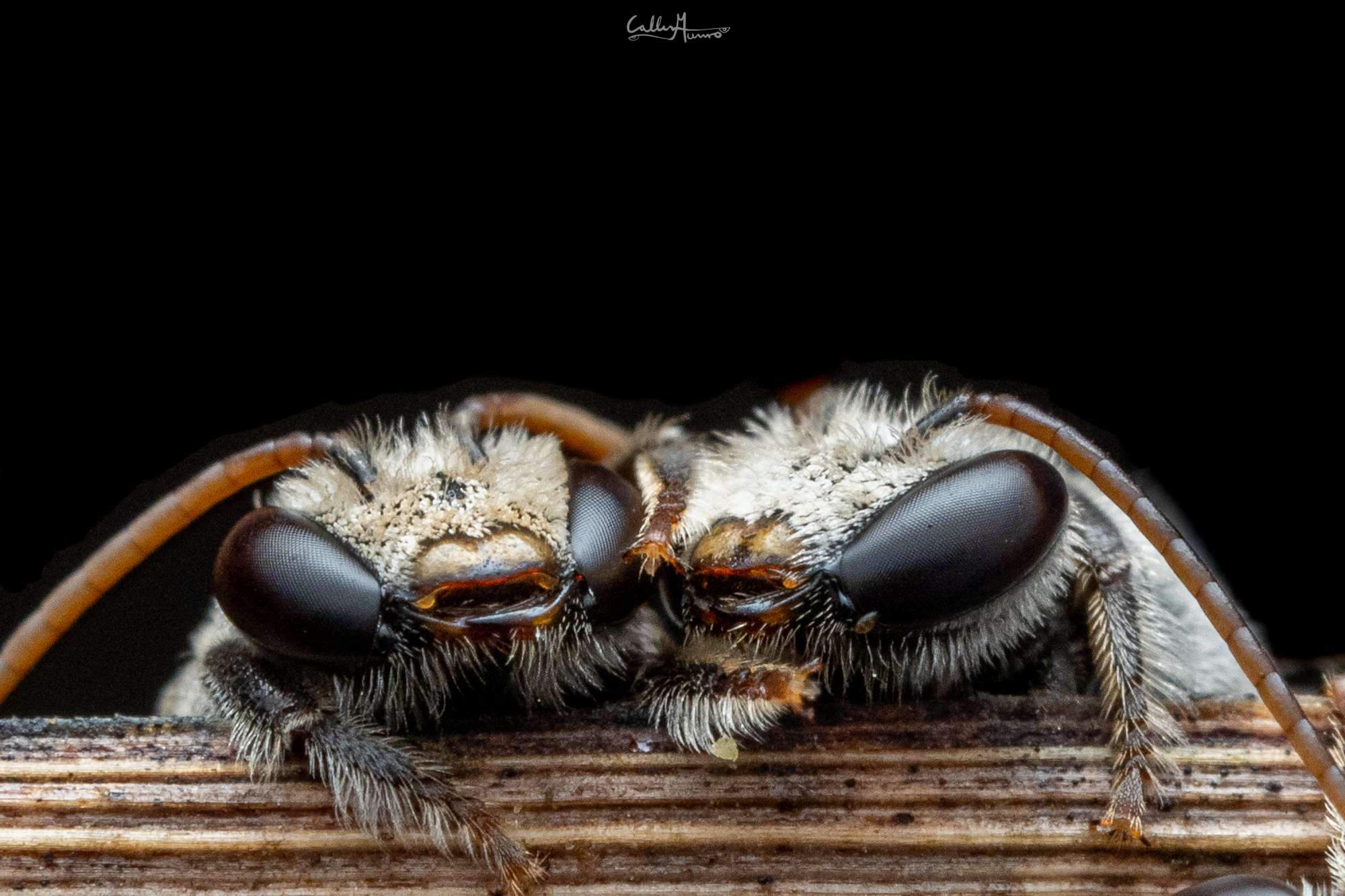 Aside from a variety of native bees, my garden is also home to a great many European Honey Bees (Apis mellifera). Although they’re an introduced species, the honey bee seems to get a bit of a free pass from naturalists. They pollinate native and introduced plants alike, and don’t seem to pose any significant threat to native species, and as such they aren’t generally afforded the same animosity as most other feral creatures. On sunny days I will often go into the garden to photograph them at work collecting pollen and nectar. I was actually attempting to take this shot while the bee had momentarily stopped to feed on these small purple flowers, but just before I clicked the shutter, it took off and I was certain I’d missed the shot. Looking at the rear display on my camera however, I was blown away to see that I’d fluked an almost perfectly symmetrical and in-focus dorsal shot of a bee in flight. It’s a result I couldn’t replicate if I tried, and believe me, I’ve tried! I was thrilled, to say the least. 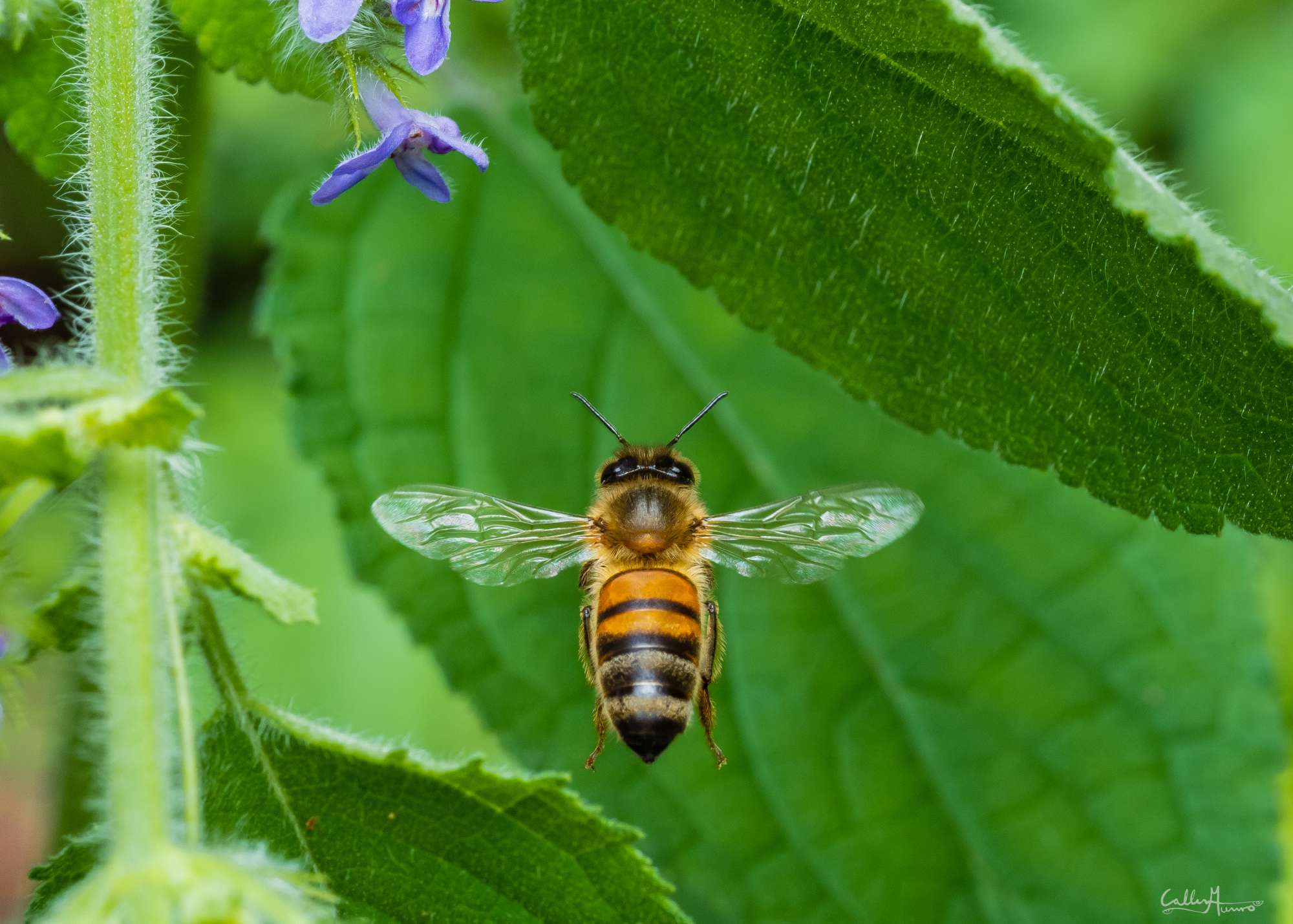 Thus concludes my inaugural submission to the Aussie Macro Photos blog space. I am always out and about with my camera and trusty Cygnustech Diffuser looking for interesting invertebrates to capture, and look forward to sharing more of my Top End buggin’ adventures with you all.

All the best. Cal