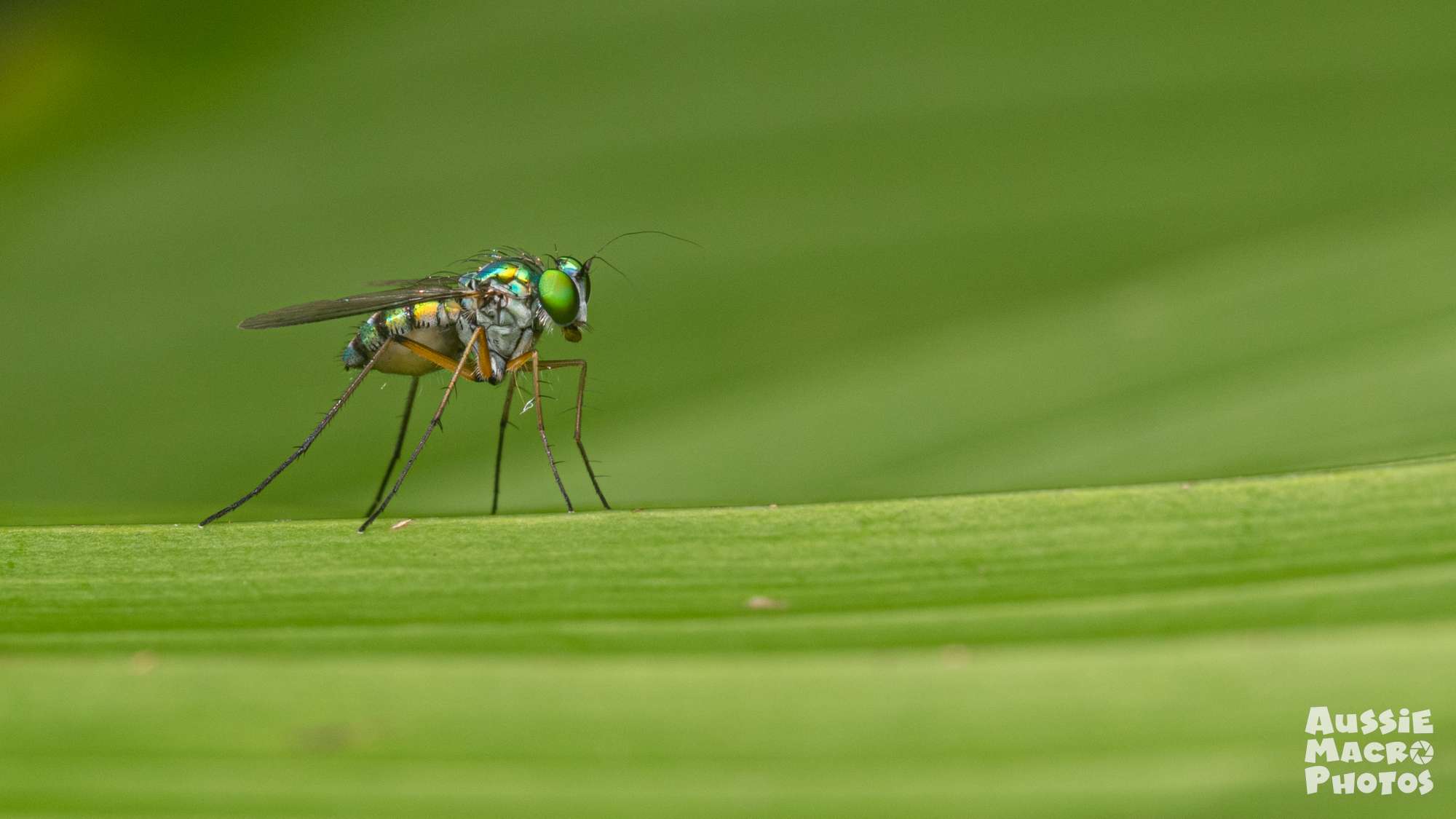 Flies of all colours, shapes and sizes can be found in the Cairns Botanic Gardens. Probably not everybody’s favourite animal but flies are very important to the environment as they are decomposers of plant and animal matter as well as being pollinators for many species of plants.   Flies are in the order Diptera and are found on every continent except Antarctica.  Diptera are a huge order, with an estimate of over a million species across a number of families including various Crane flies, Mosquitoes, House flies, Horse flies and Blow flies. True flies are distinct from other flying insects as they only have one pair of wings.

The fascinating thing about flies is their incredibly sophisticated eyes.  With most fly species, their eyes make up the majority of the head and are often a kaleidoscope of interesting colours and patterns.  It gives the fly their incredible ability to escape predators as they have almost 360 degree vision.

In this edition of Buggin with Bridgey, I’ll be selecting some of the more fascinating and commonly seen species that can be found in the Wet Tropics as well as the Cairns Botanic Gardens.

This species can be regularly seen throughout the Cairns Botanic Gardens zipping between the top surfaces of large round leaves. They are tricky little things to photograph as they are quite skitzy. With their absolutely stunning metallic body, you could easily imagine these little flies as futuristic robotic drones.   There are also a lot of other species in this family, some coloured orange, red and a lot of other green variations.

Since starting my macro photography journey this species was probably the first fly to capture my interest. The bulbous hourglass like body with beautiful metallic colours and orange decorated wings with giant red eyes was a intriguing diversion from a regular house fly, and started my appreciation and understanding that flies could be beautiful! 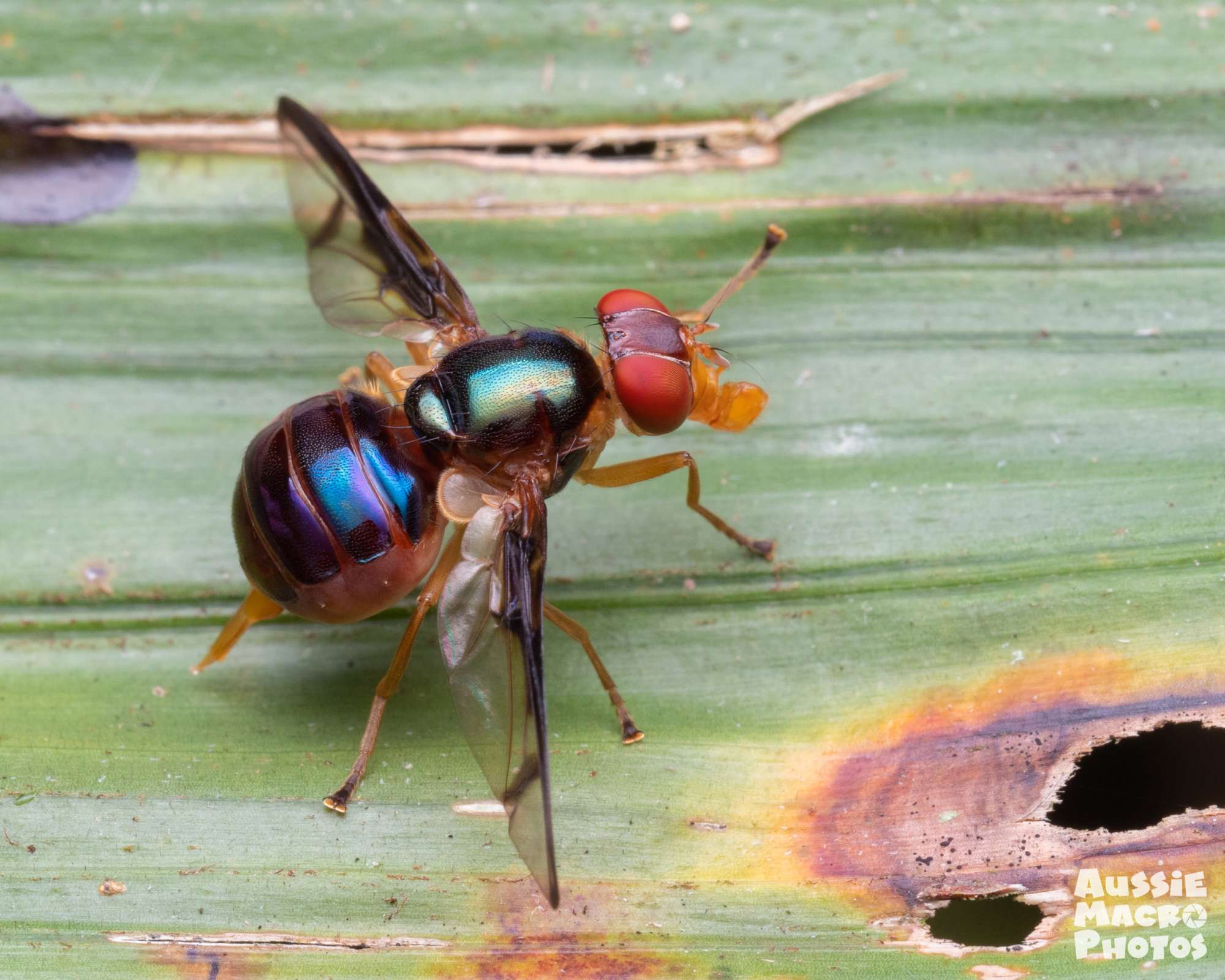 Regularly sitting on flowers in the Cairns Botanic Gardens, the Banana Stalk Fly is reasonably easy to get up close and personal to and photograph. They’re photogenic appearance of swollen yellow belly and giant red eyes are somewhat different to the other flies.

Ok so when I started my macro photography journey, I would see this species regularly and I used to liken them to air traffic controllers the way that they are constantly wwaving their white tipped antennaes around like little battons.   So for years that’s what I called them ‘Air Traffic Controller Bugs.   Happy to know them by their true common name now.   They are very common, we will see as many as 15 on any 2-hour Let’s Go Buggin Walk.

These nectar and pollen feeding flies are a very docile and easily photographed fly.   Slow flying and you can get up-close-and-personal to them without them flying away.  Great to practice your macro photography skills! 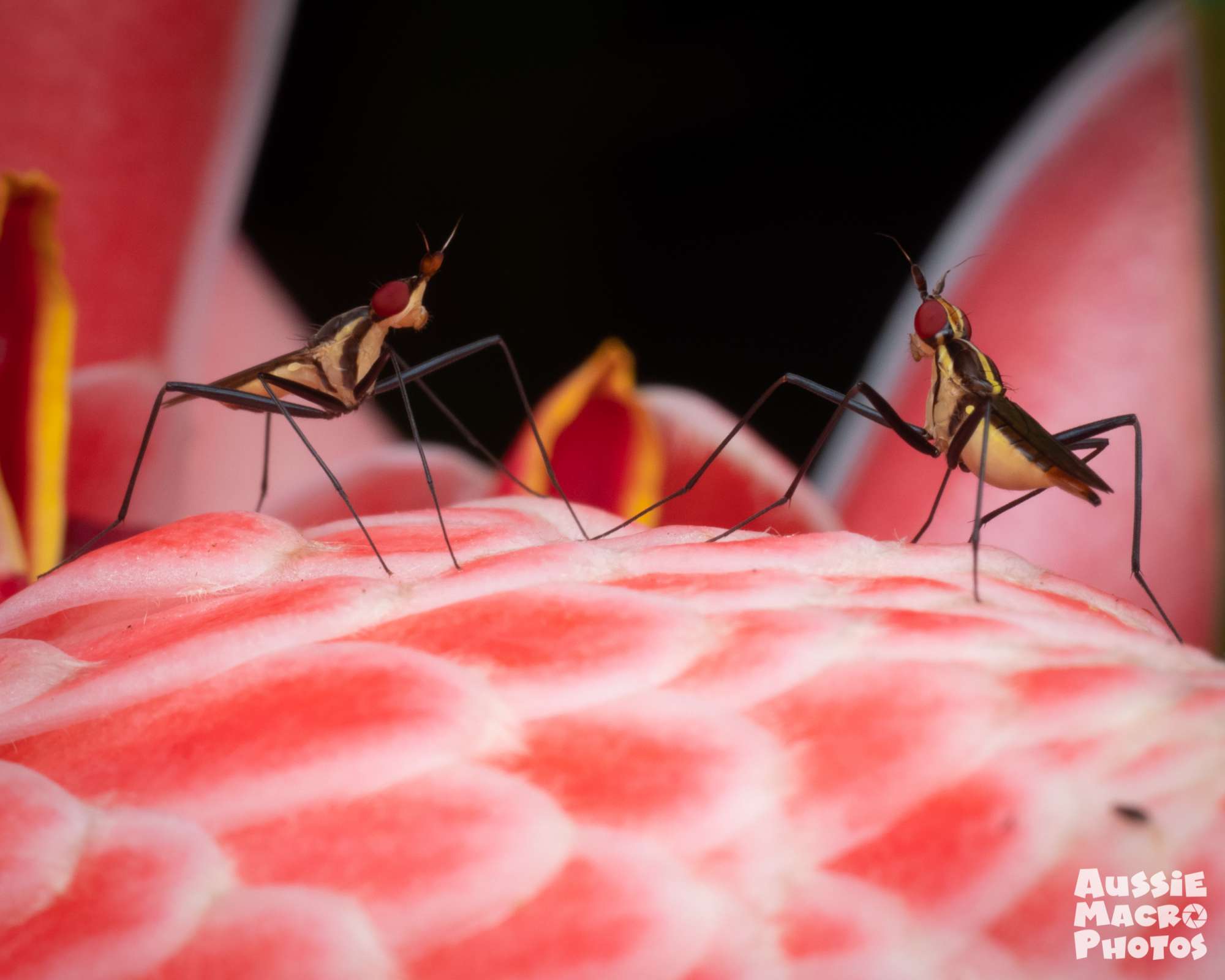 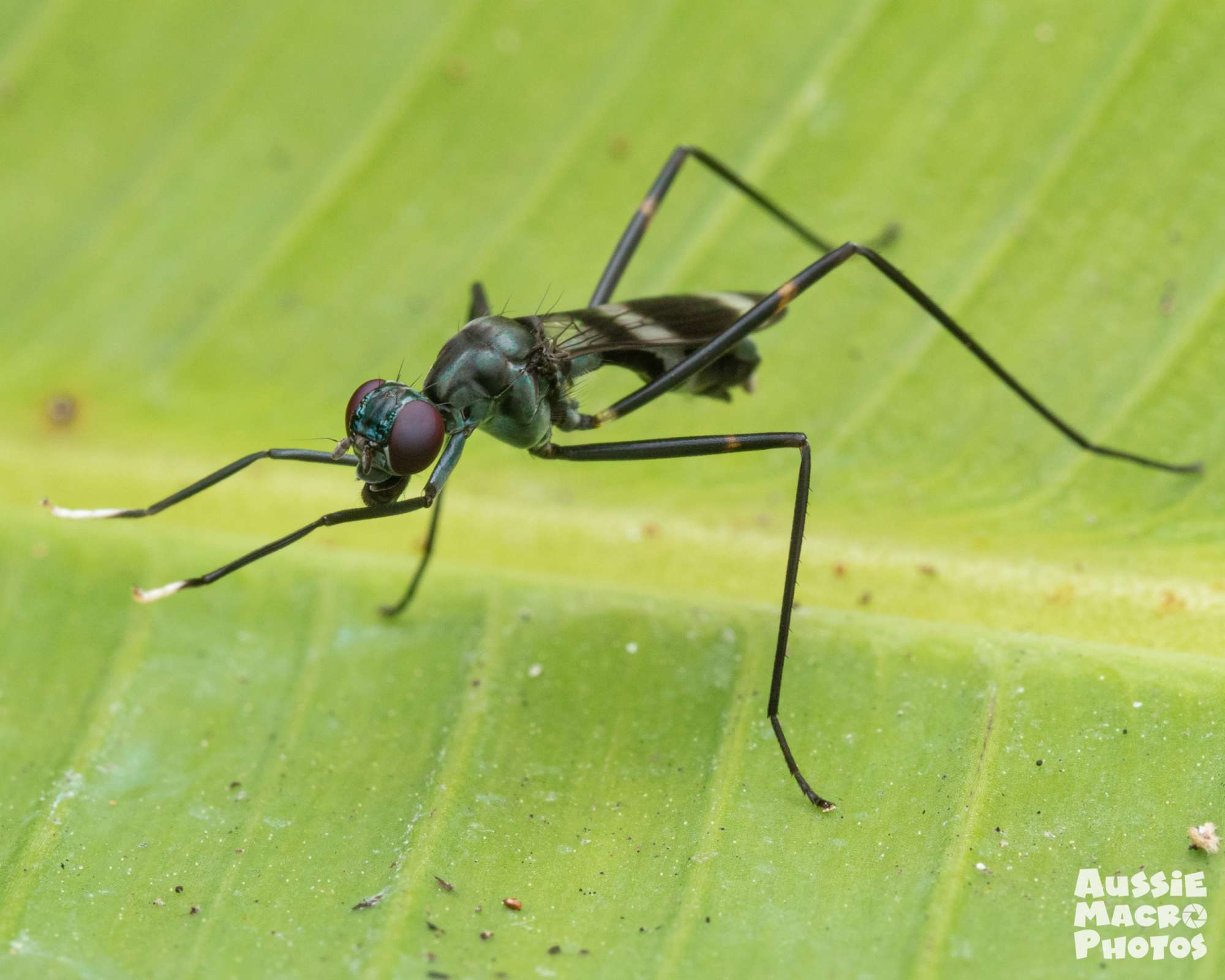 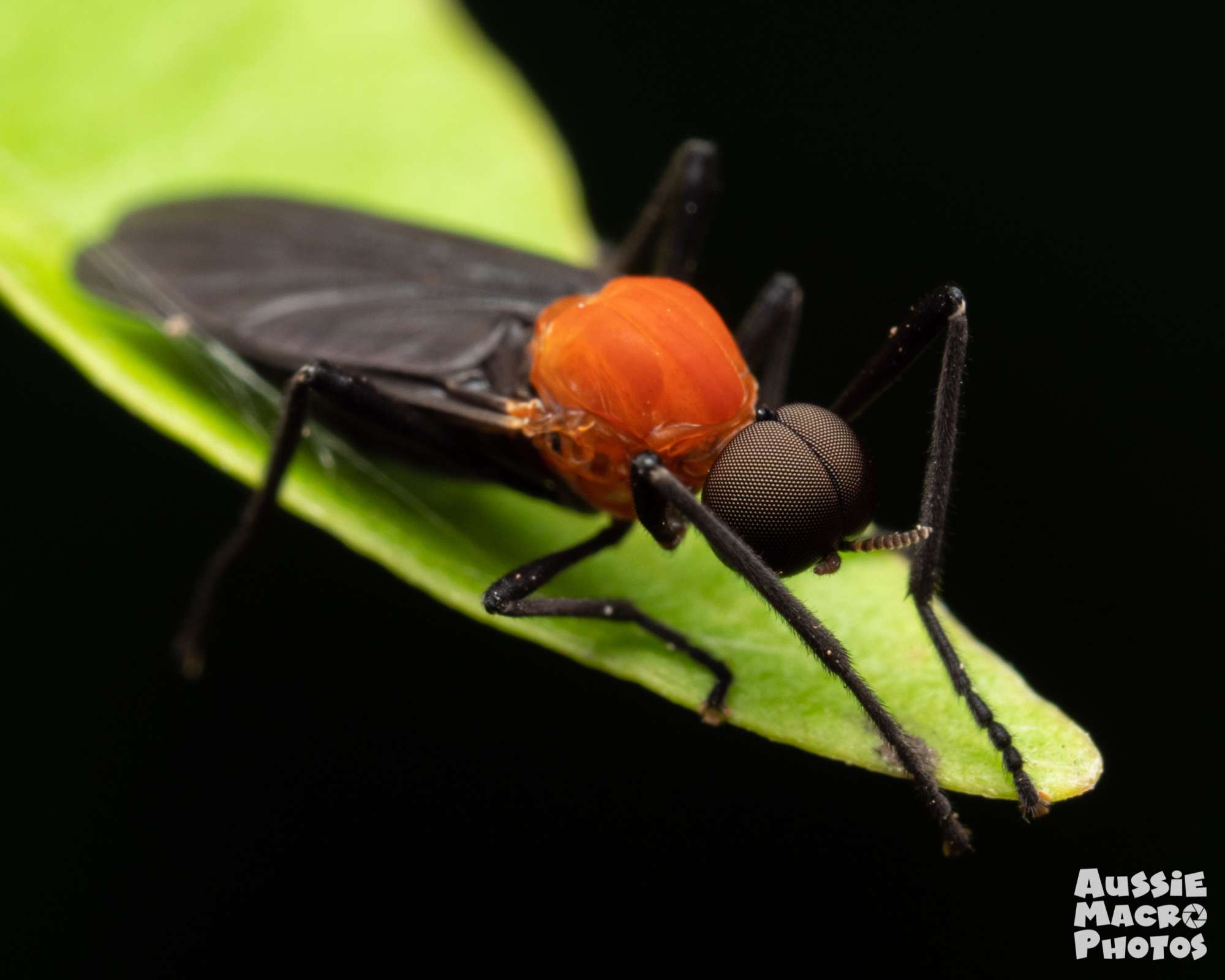 Species in these families are closely related and are often dismissed, but as soon as you get a macro lens into their dazzling eyes you quickly become fascinated.   Blowflies will often have a large metallic abdomen while the flesh flies have muted colours. 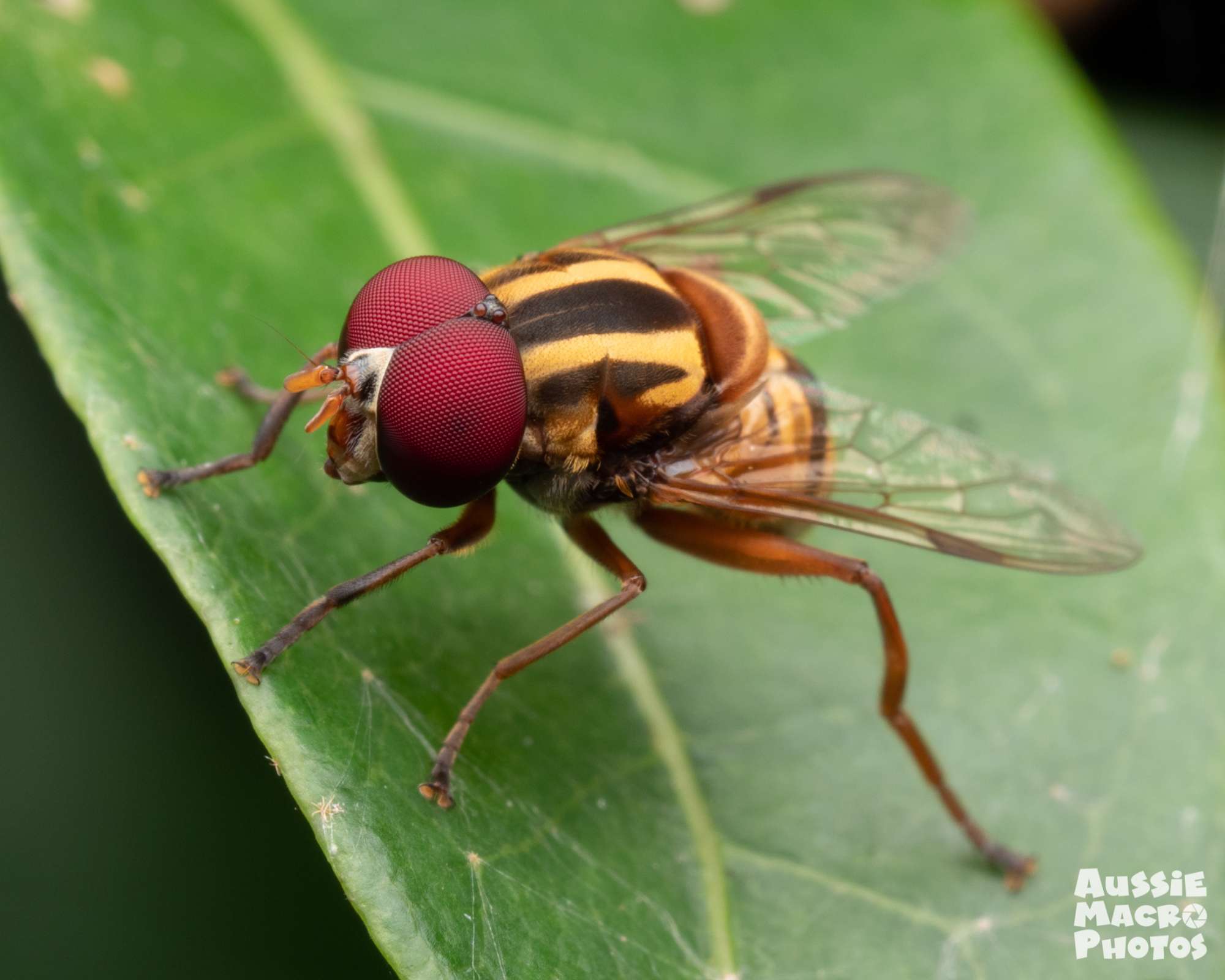 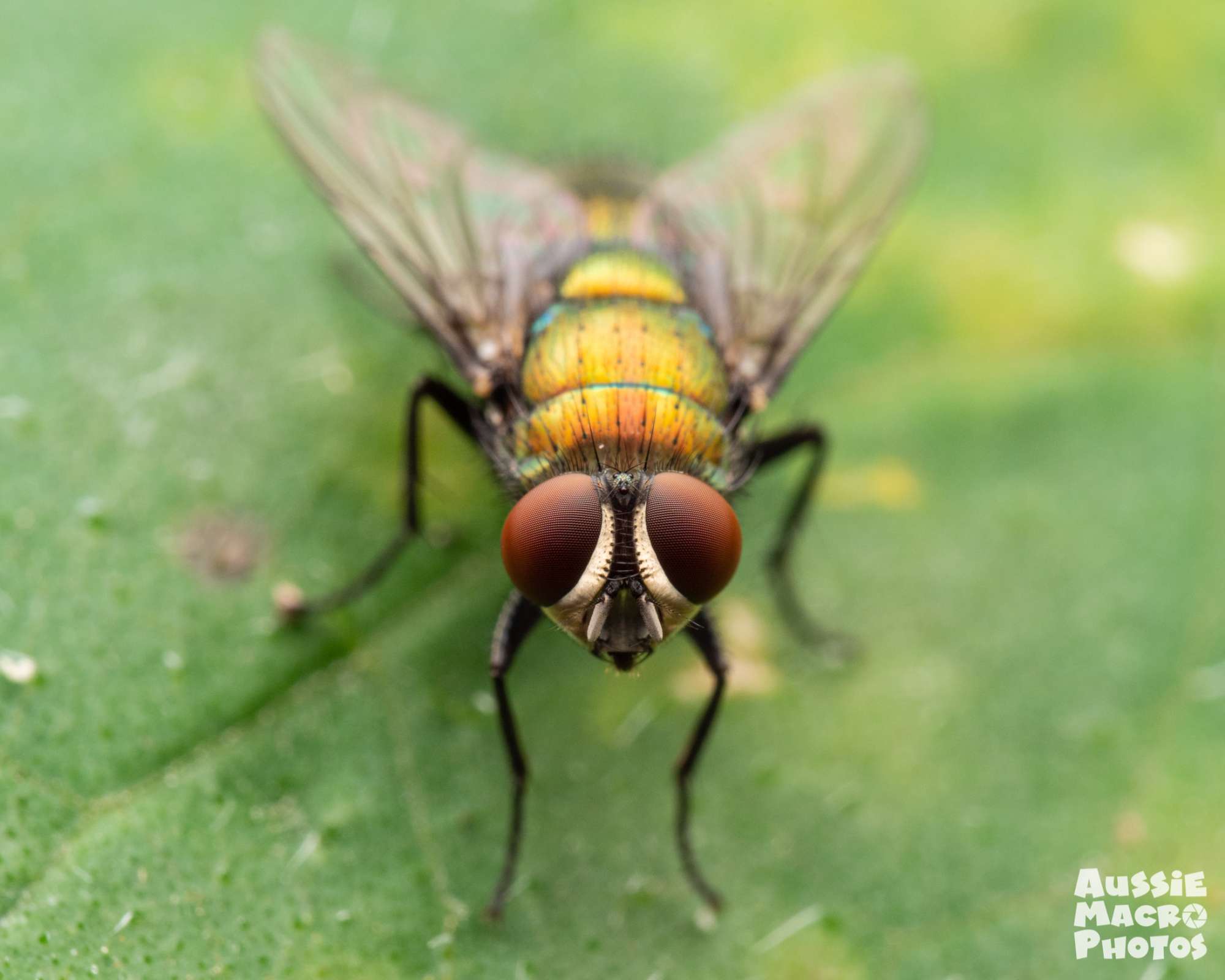 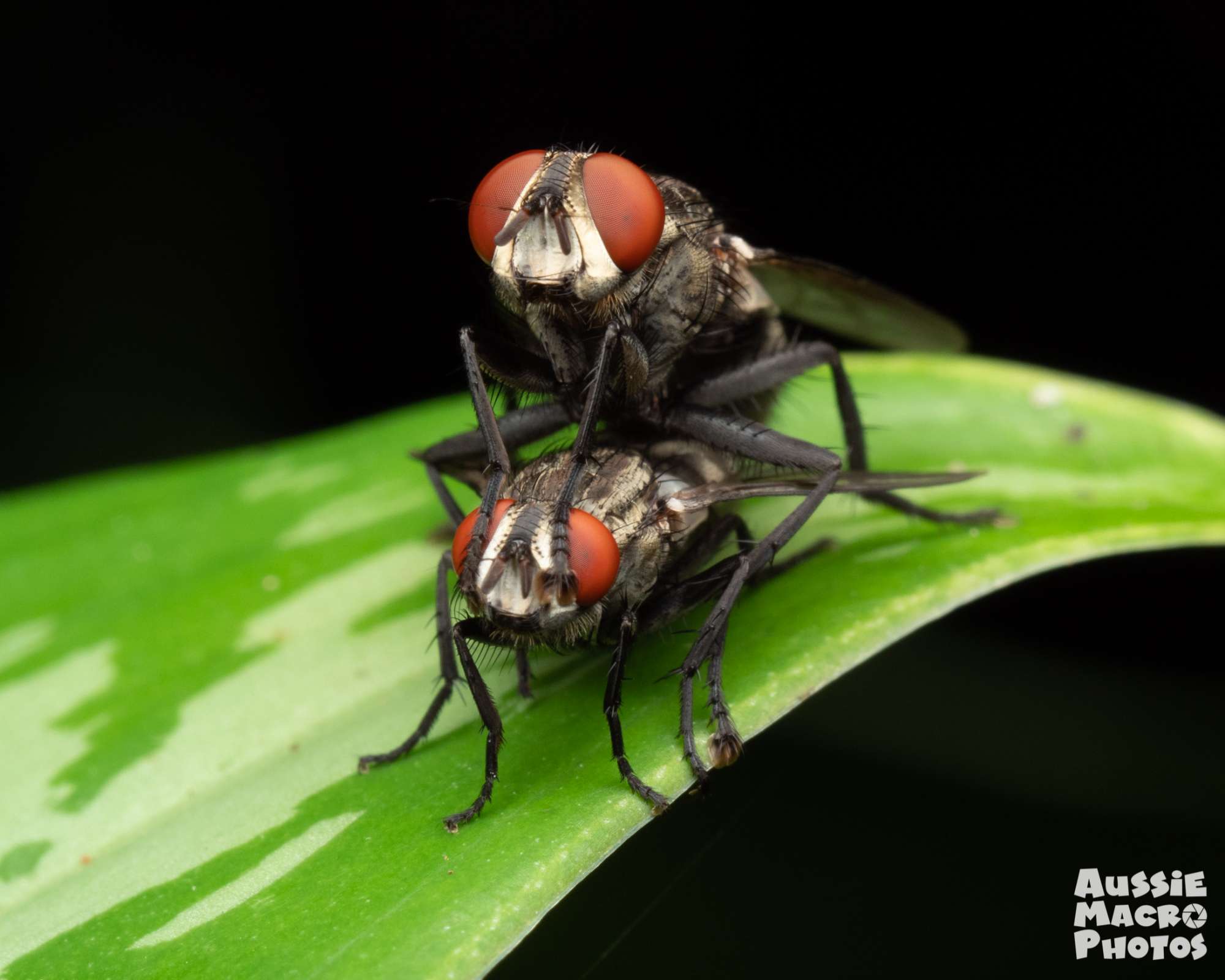 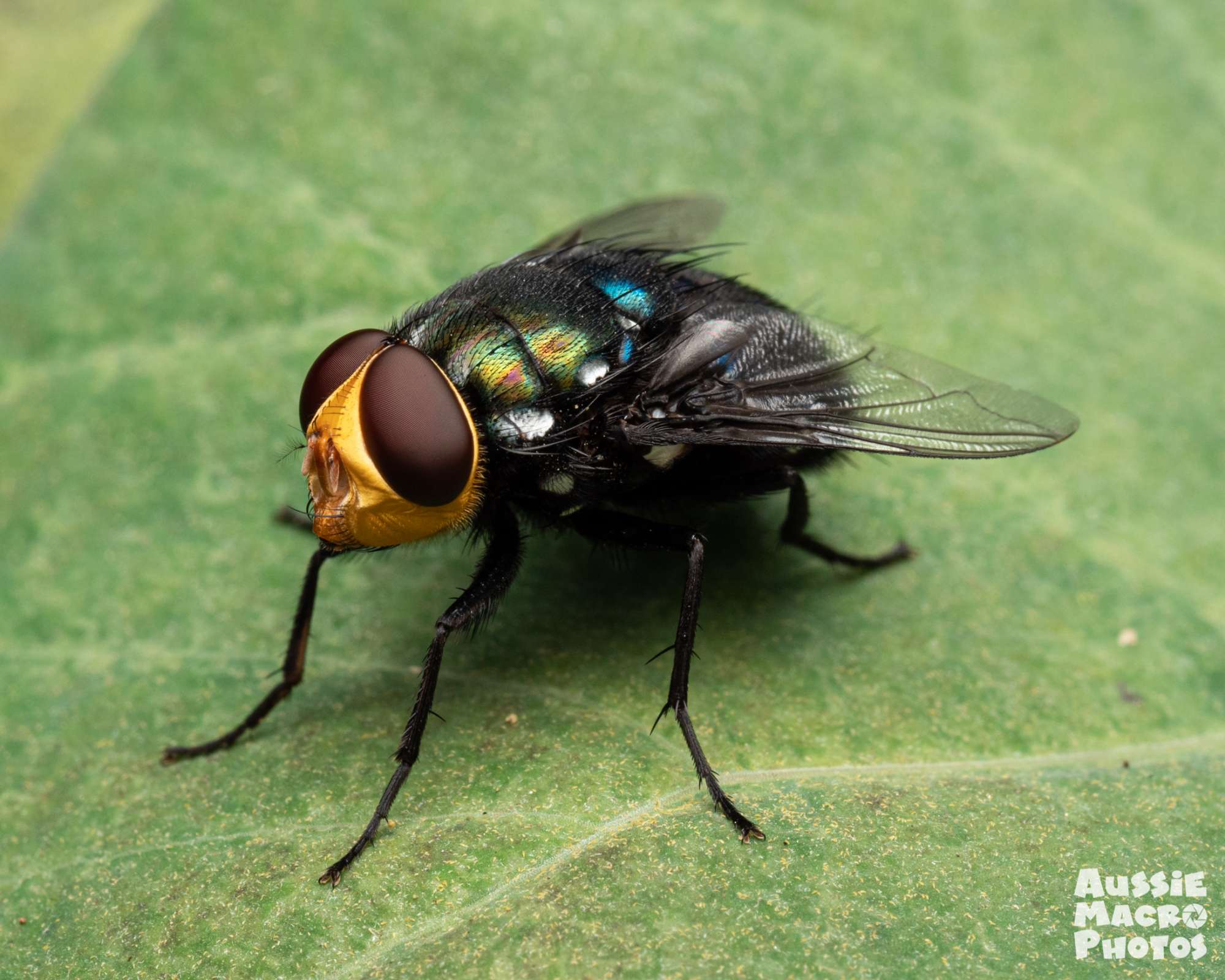 A variety of Blowflies (Calliphoridae) and Flesh Flies (Sarcophagidae)

On any given walk in the Cairns Botanic Gardens in July and August we can see multitudes of the species and many of them mating.   Often mistaken for a HUGE mosquito, however they are not blood suckers and are quite docile and tolerant of cameras getting nice and close for a photo.

Like their name-sake, these flies can ‘hover’ a lot like a hummingbird.  The best way to get photos of these little marvels is to take a seat next to a flower bed that they are flying around and get nice and comfortable.  Eventually, one will fly to a flower that you have your camera close to and you can quickly aim and shoot.

These flies are the super stealth army helicopters of the insect world.  Robustly built and with bristly bodies, often quite large.   You can often find them sitting on a twig with their victim helplessly being eaten alive. 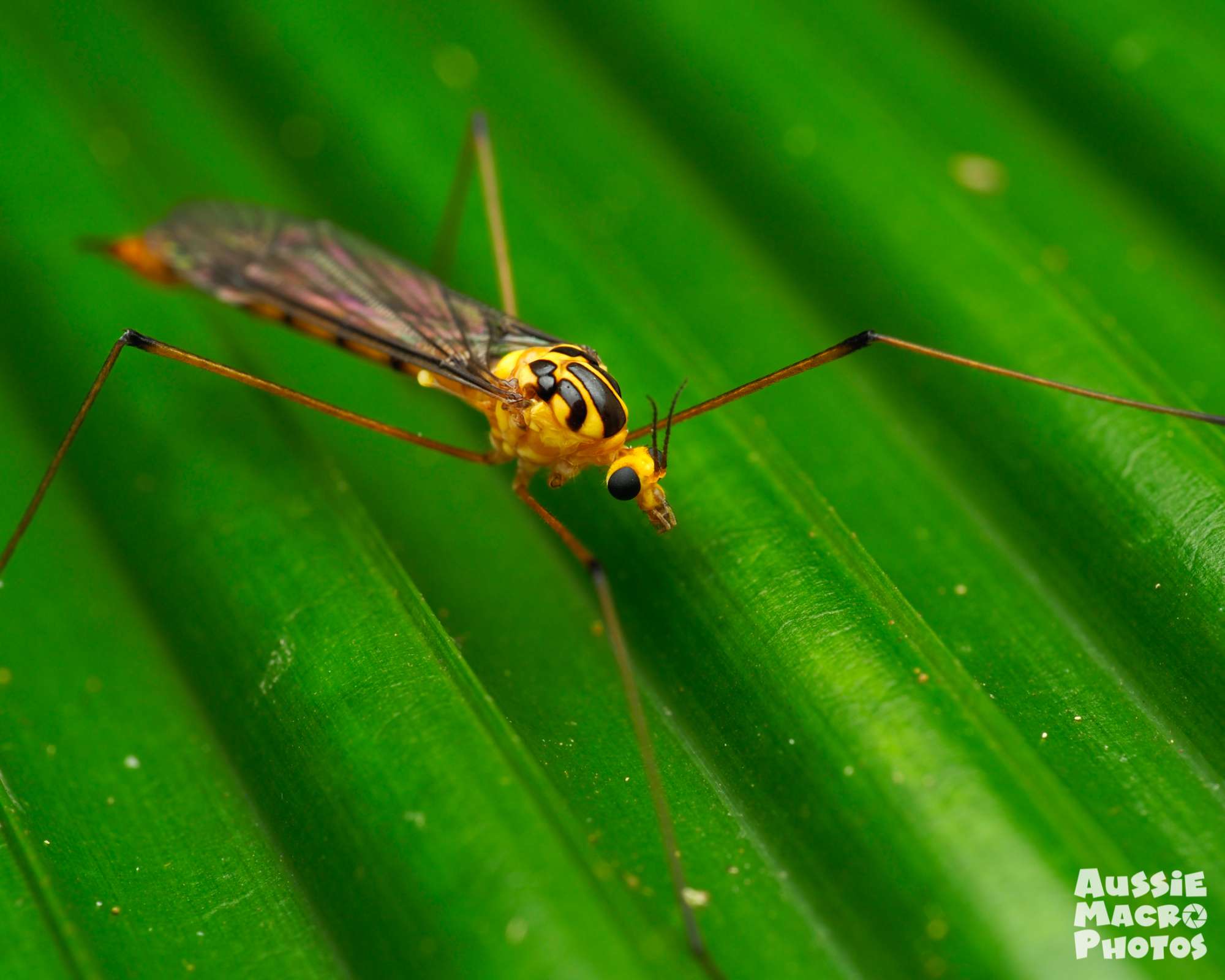 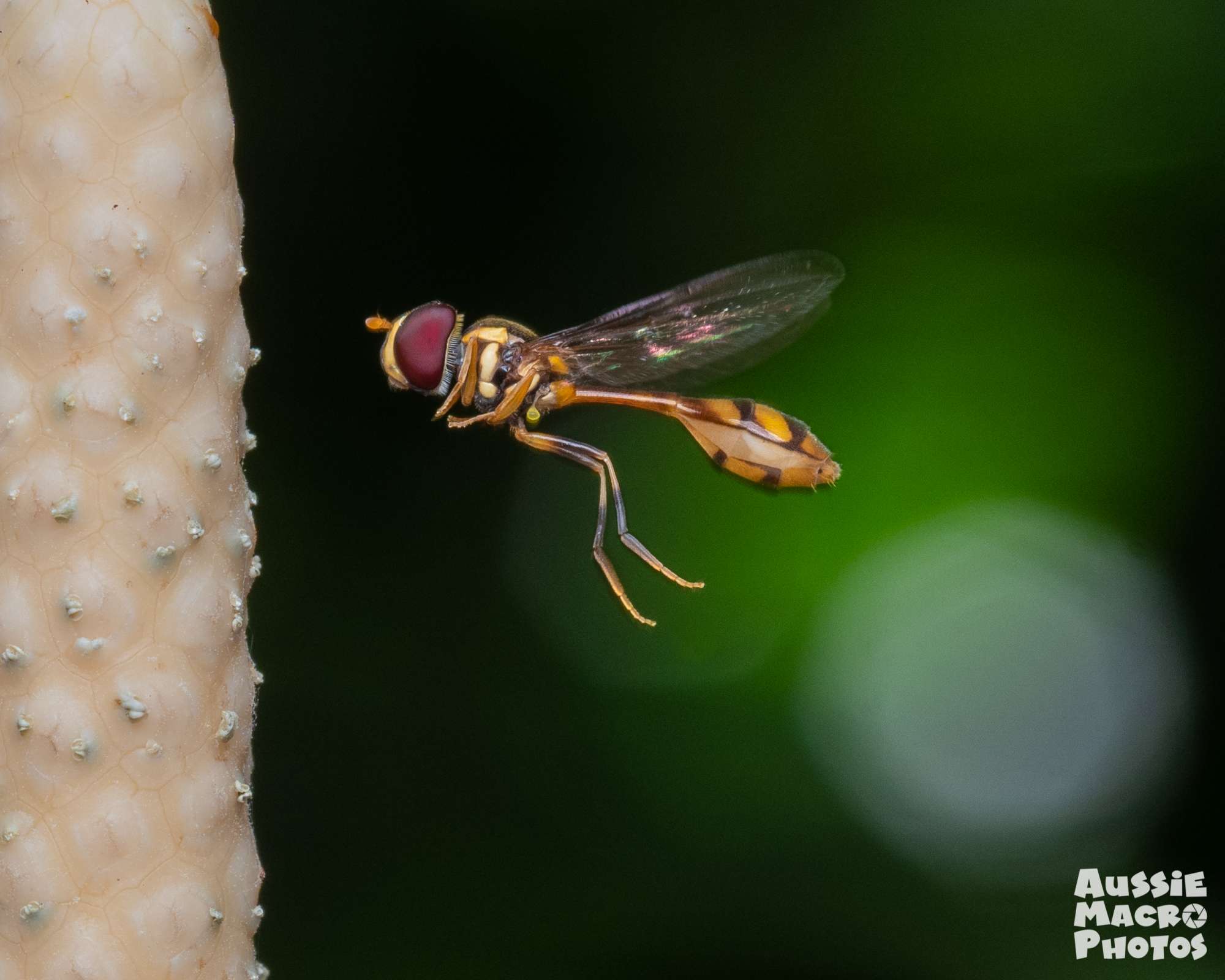 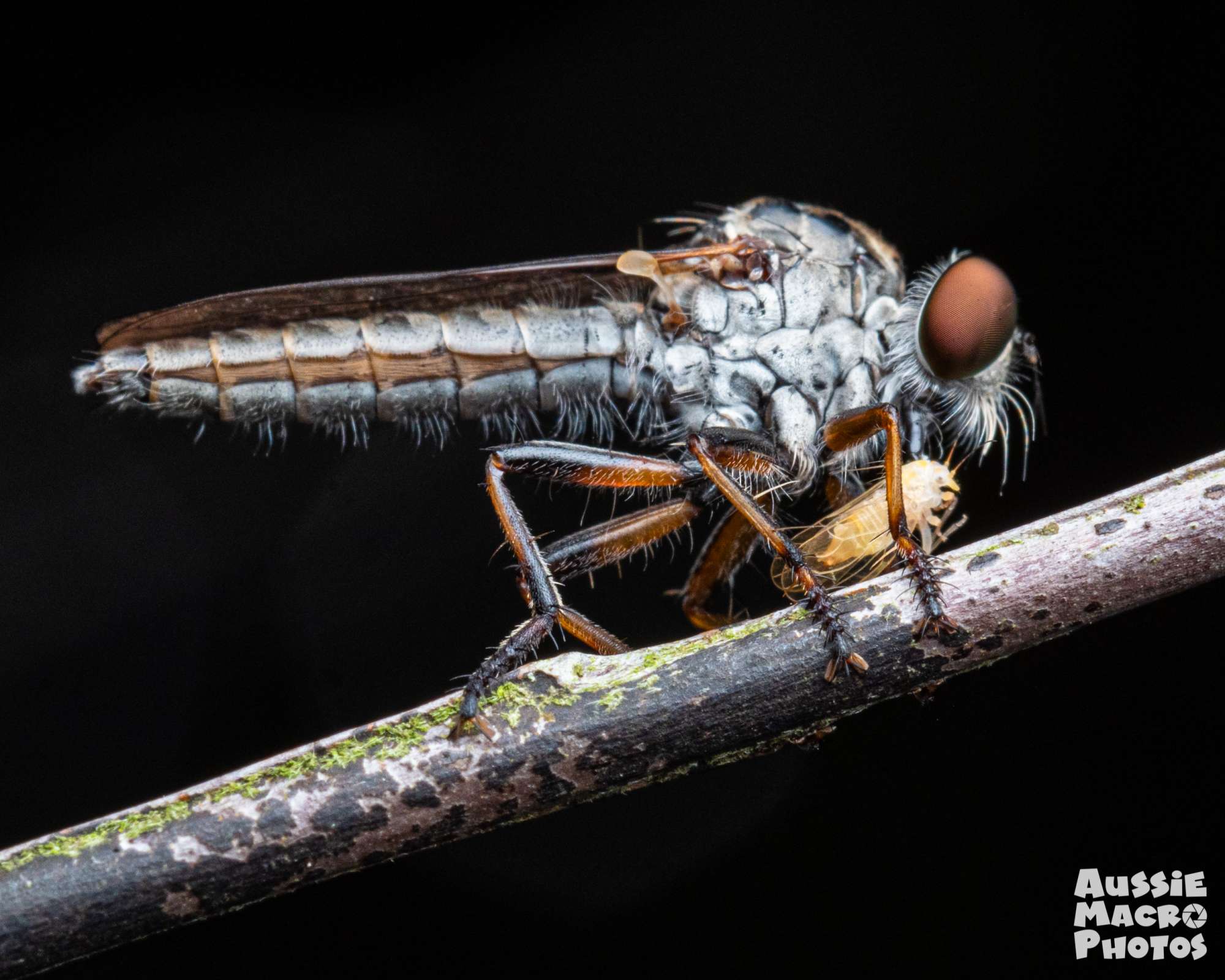 A fly species that can be found almost world-wide! They posses beautiful big eyes with stunning green and dark purple patterns.  Reaching about 2cm with mostly black body with black wings. I’ve been fortunate to have one stay nice and still for me to capture this image. 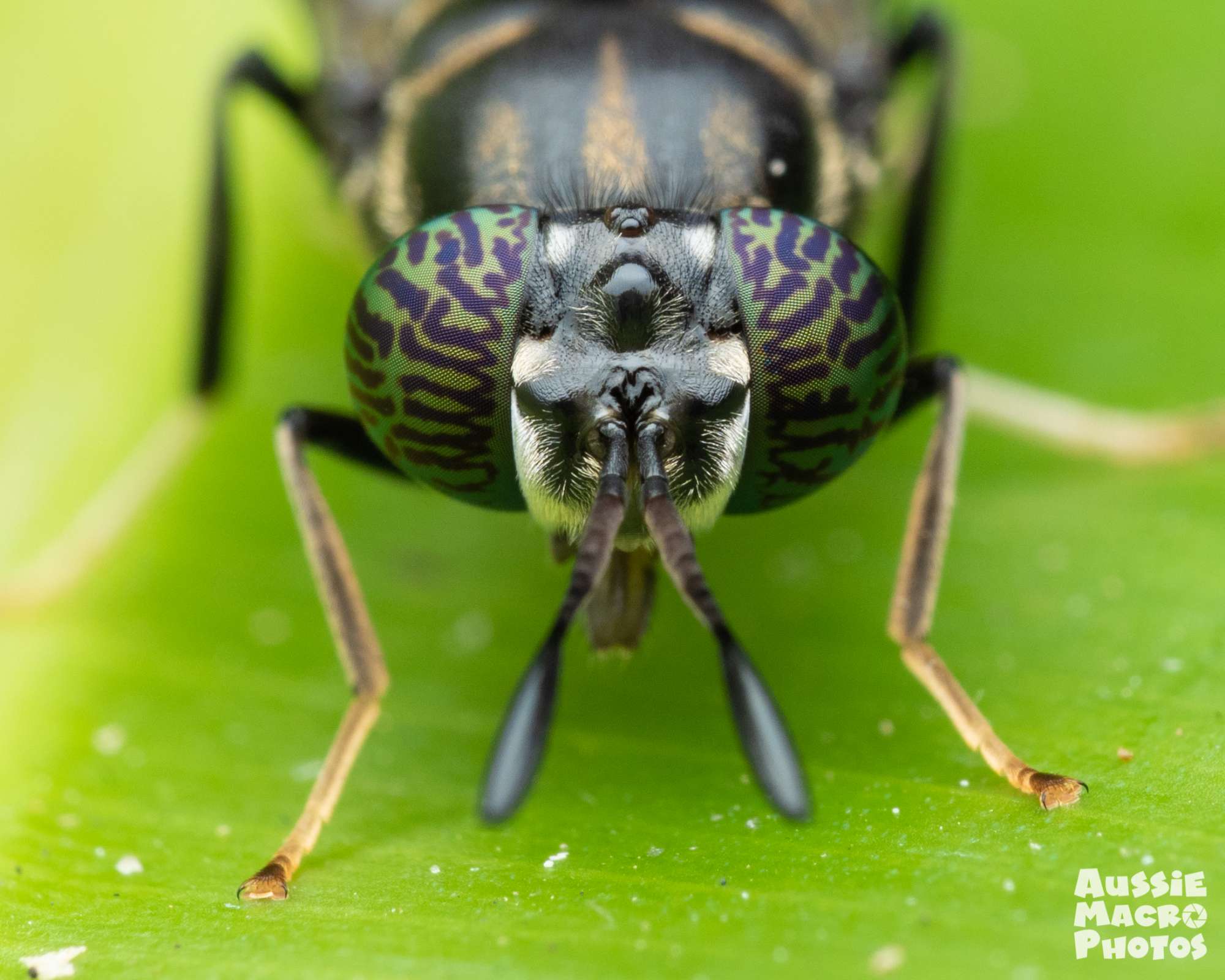 Join me to explore the Cairns Botanic Gardens to try and spot some of these beautiful flies on a Let’s Go Buggin Tour.  Use ‘blog’ as the coupon code for 20% discount on your tour booking.