Grasshoppers in the Cairns Botanic Gardens

and in the Wet Tropics 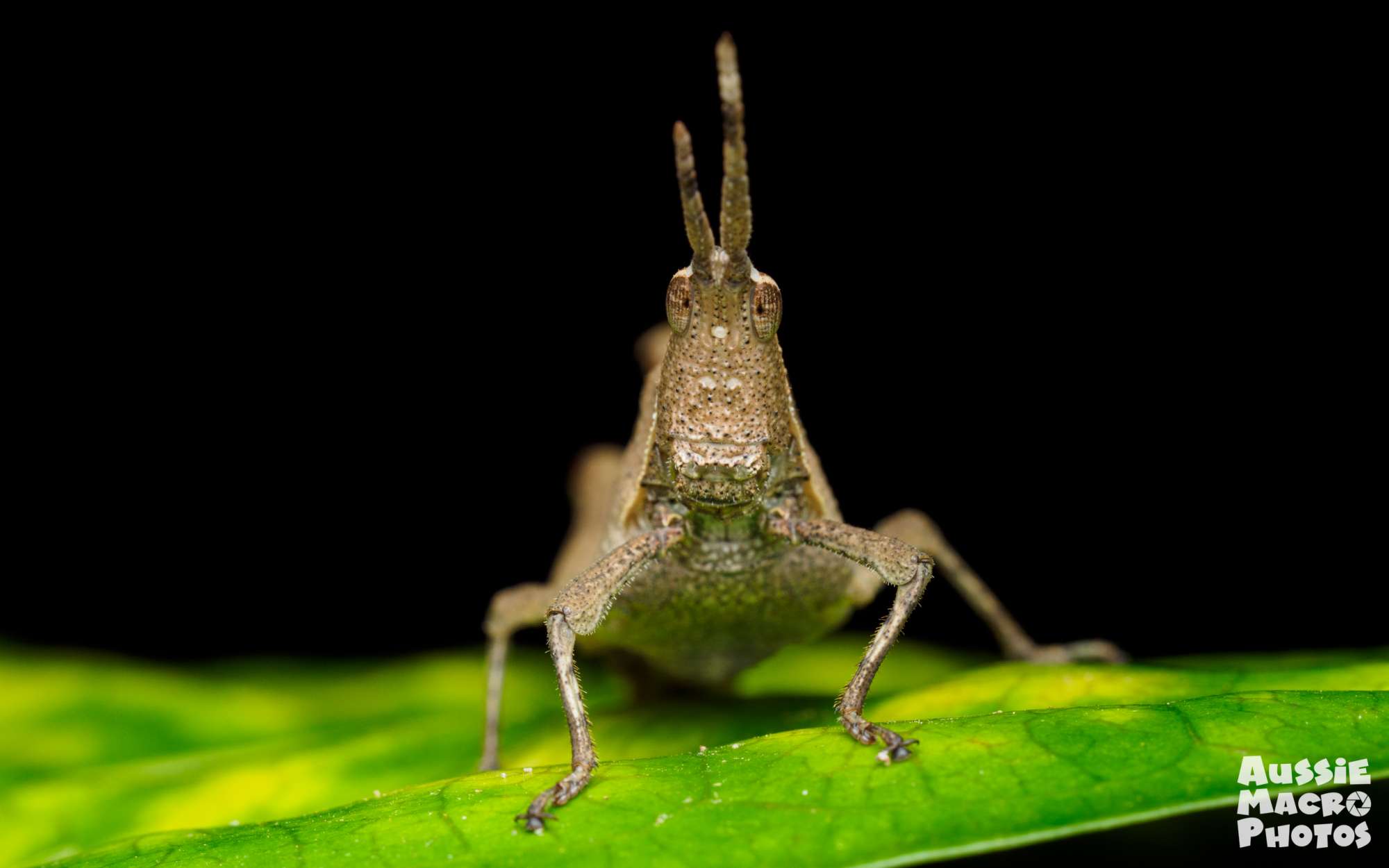 I thought it was about time that I focused on our various Grasshoppers that can be found in the Cairns Botanic Gardens and the Wet Tropics. Grasshoppers lie within the Orthoptera order which also includes crickets and katydids, which will feature in an upcoming Blog.  They have their own suborder called Caelifera and family Acrididae.

These small insects are found throughout the world, and make up a large part of the insect population and can be found in almost every habitat on Earth. There are 11,000 species of grasshopper worldwide and about 1,900 species found in Australia. The most common Grasshopper found in the Cairns Botanic Gardens in my experience is the Giant Grasshopper (Valanga irregularis).

Australia’s Largest Grasshoppers are common in the Cairns Botanic Gardens and are also fairly widespread around the north of Australia. Reports of up to 9 centimetres in length have been recorded and I’m sure that I have personally sighted a number of individuals this length.  Females are the larger sex in this species.  This huge grasshopper makes its home among trees, shrubs and plants where it feeds on young leaves.

Its scientific name, ‘Valanga’, comes from the Latin word ‘valere’ meaning to be strong and firm. Its second scientific name means ‘irregular’ because of its unique colour variations which vary according to the region in which it is found.

In my experience, they are reasonably easy to approach and photograph as long as you move slowly towards them without any sudden movements. I can often get my lens within centimetres of them without disturbing them.  At the start of the wet season, you can often find huge numbers of juveniles.  They are a well-known leaf-eater for any keen gardener and therefore unappreciated.  However, they make a very important part of the food chain being food for other insects, spiders, reptiles and birds. 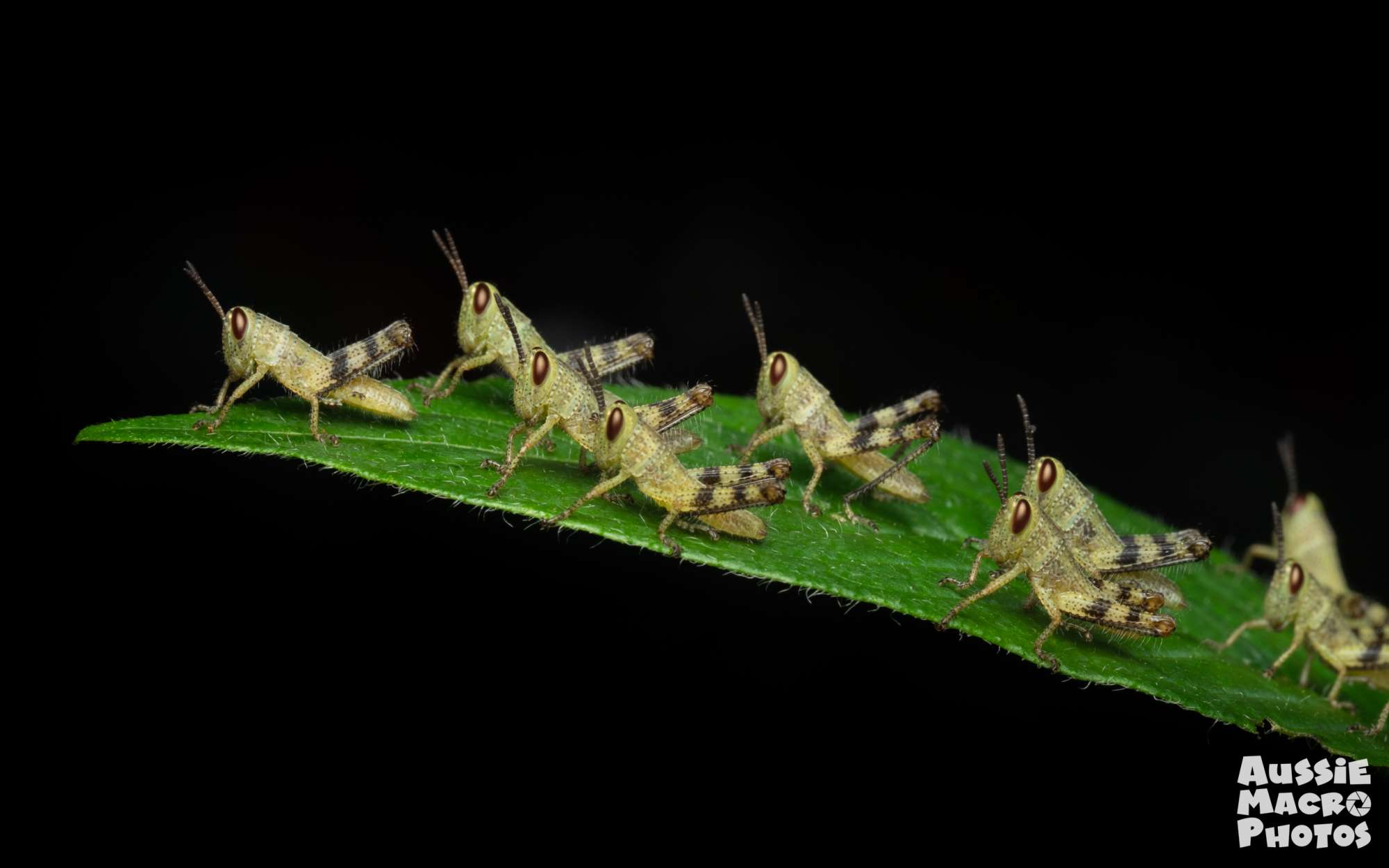 Juvenile Giant Grasshoppers (Valanga irregularis) at the start of the wet season.

Probably my favourite grasshopper that can be found in the Cairns Botanic Gardens is known as the Red-legged Methiola (Methiola picta). The species of short-horned grasshopper can be found on twigs and leaves. This species is exceptionally colourful even by insect standards with bright green, red or blue on its thorax (shoulders) and abdomen (rear), which is distinctive against their darker bodies.

They are more active during the morning and afternoon hours but may also be seen at night when they come out to feed on plants.  These beautiful grasshoppers are only found in Queensland, with the vast majority of the population in the Wet Tropics. 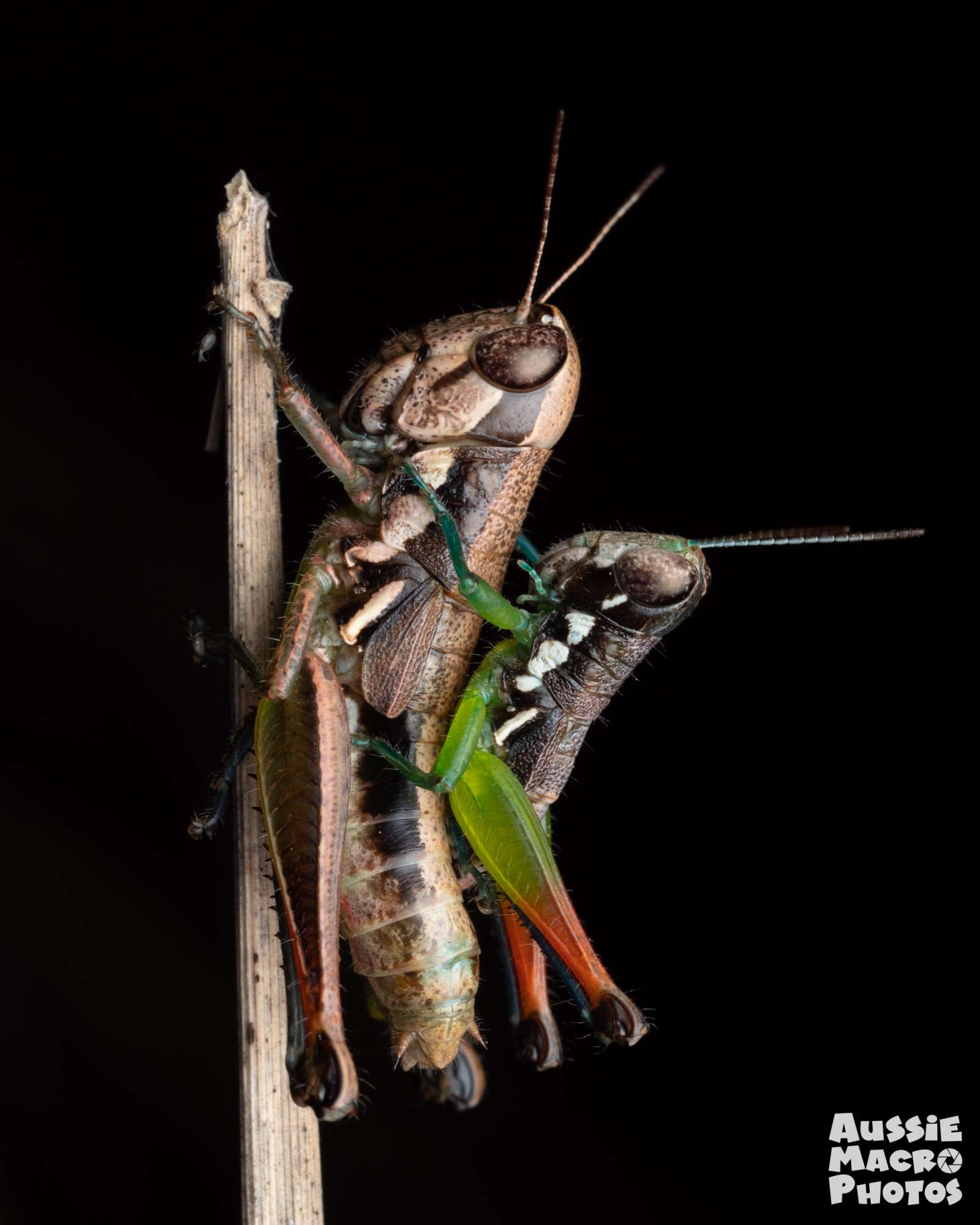 Mating Red-legged Methiola (Methiola picta) Grasshoppers.  The female is the larger of the two.

Also known as a Gumleaf grasshopper is a very cute leaf-looking grasshopper found in the Wet Tropics of Queensland. It is a leaf mimicking grasshopper that has adapted its shape to that of leaves, giving it an advantage over predators by allowing them to blend in to the environment.

The majority of my sightings of these characteristic grasshoppers are at night when they come out to eat.  They are especially cute when they use their legs to clean their face and antennae with their feet.

The Gesonula mundata is a beautiful species of short-horned grasshopper.  It is also found in Southeast Asia and Oceania, where it lives in tropical forests. The Gesonula mundata has large eyes and bright yellow stripes across its wings, which make it easy to spot.

This species isn’t as common as some of the fore-mentioned species, and probably why it doesn’t have a common name.  I will often find them close to waterways and also areas where there is an abundance of long grasses. 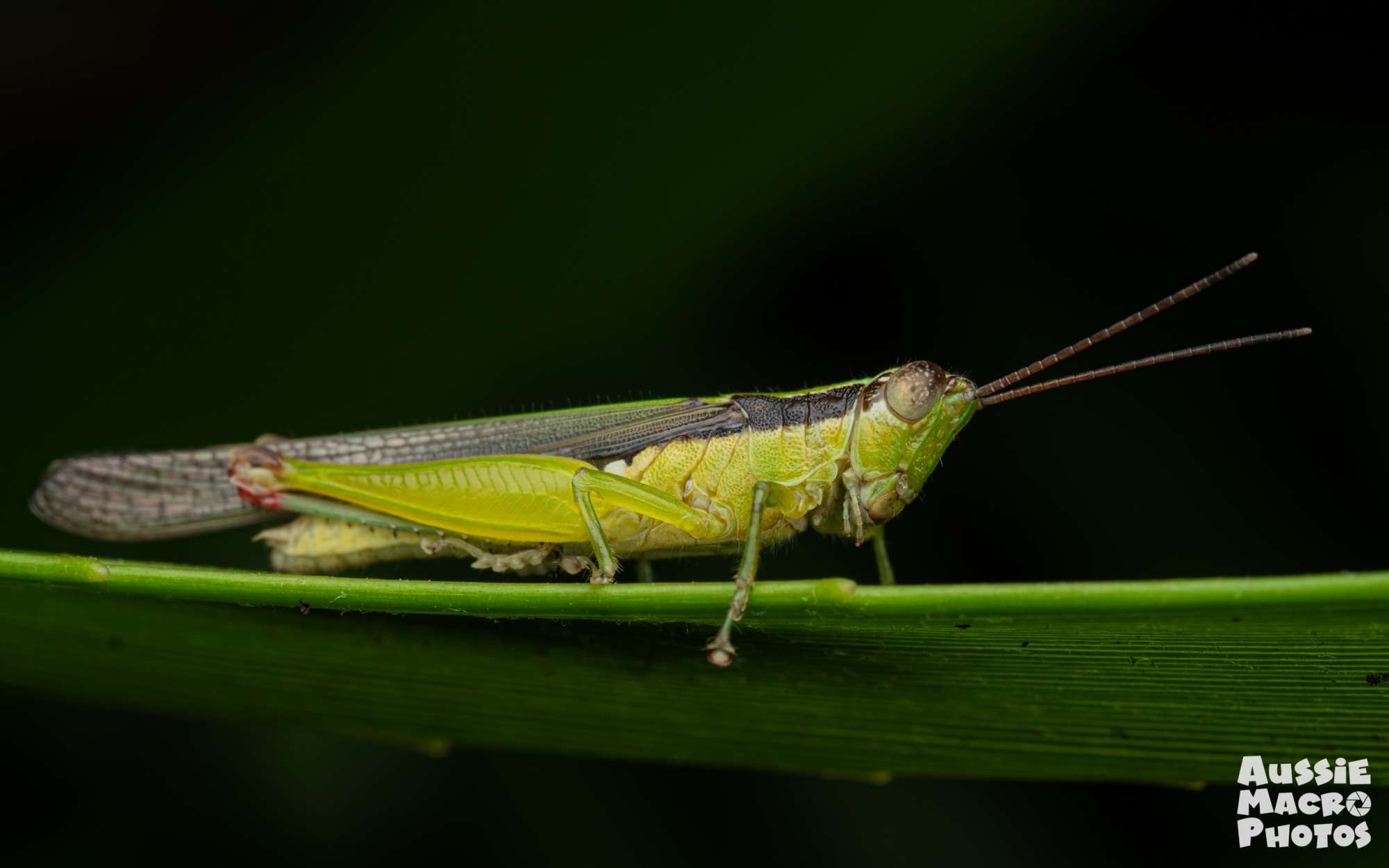 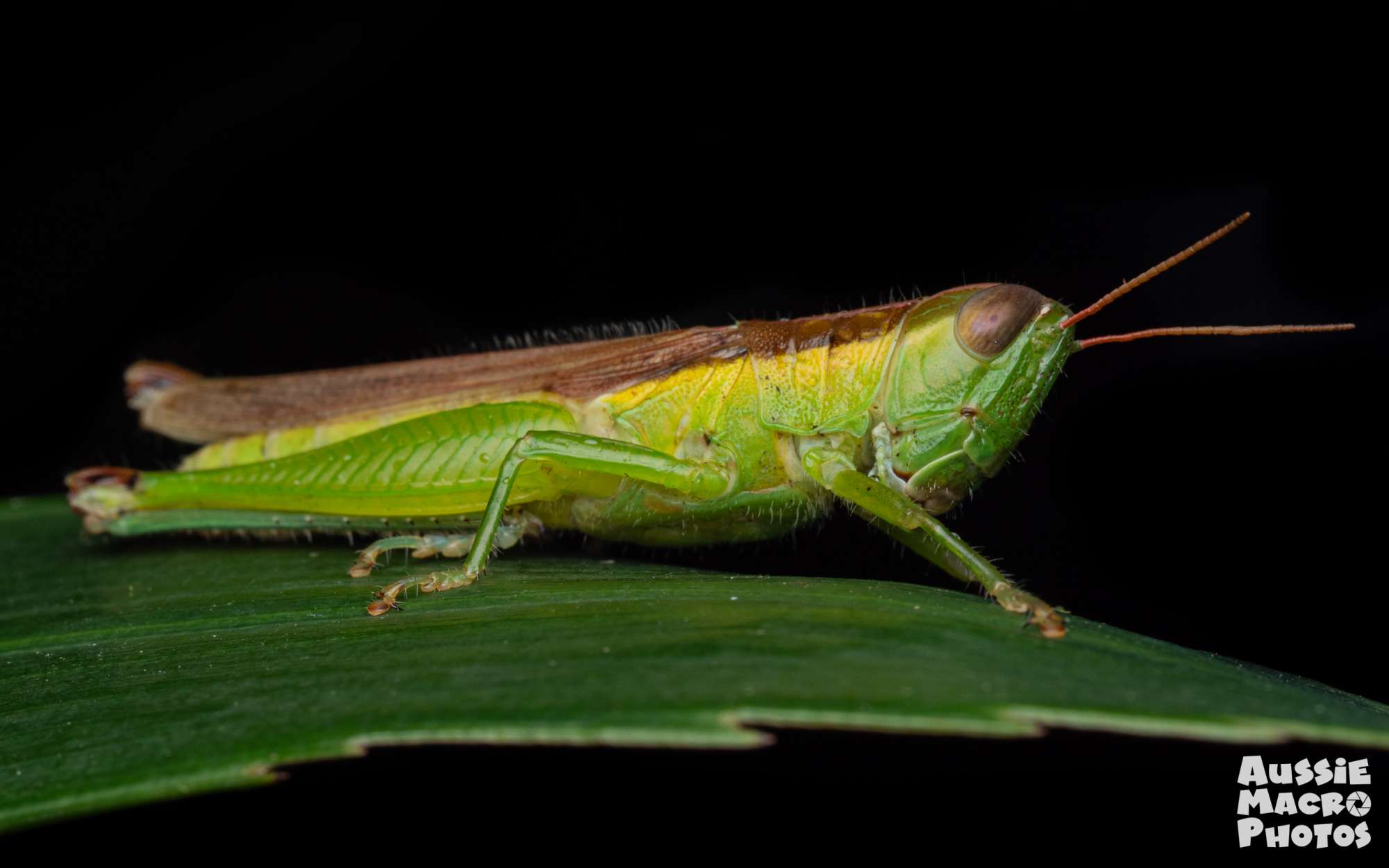 Would you like to see some of these amazing grasshoppers firsthand in the Cairns Botanic Gardens on a Let’s Go Buggin Tour?  Use ‘blog’ as the coupon code for 20% discount on your tour booking.

Next Blog in late February.