Mimicry in the Cairns Botanic Gardens

and in the Wet Tropics 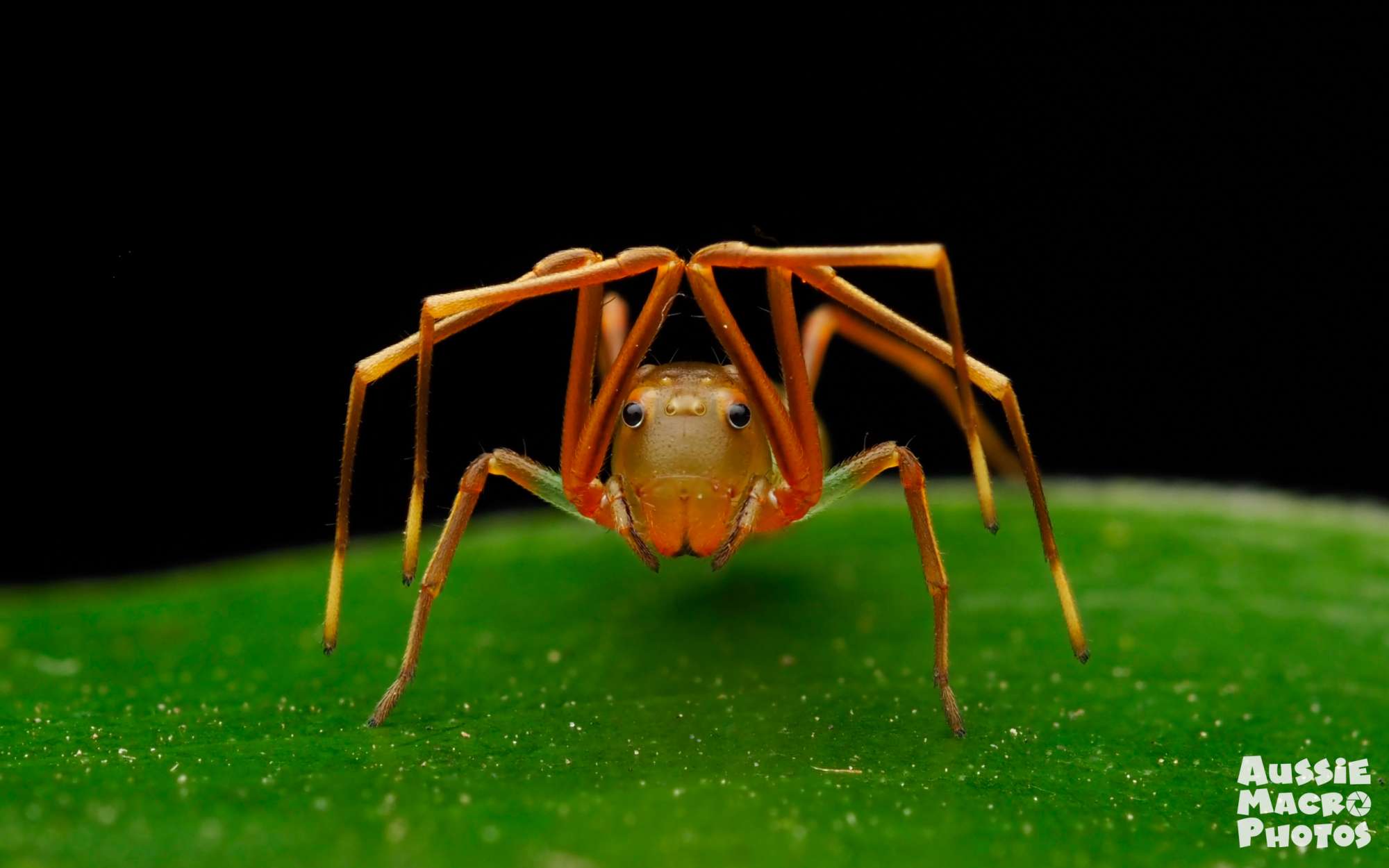 When I first started thinking about this article titled Mimicry in the Cairns Botanic Gardens, I learned that there are several forms of mimicry and they are categorised by the intention or the evolutionary persuasion of the species doing the mimicry.  The complexity is somewhat overwhelming but absolutely intriguing.  I can understand how this subject could easily become a deep dive into nature offering up the endless race between predator and victim.

The first of these mimic styles is called Aggressive Mimicry.  This is when the ‘Mimic’ assumes the ‘model’ for the purpose of predatory behavior.  We have several species that use Aggressive Mimicry in the Cairns Botanic Gardens & Wet Tropics of Queensland.

Featured mid-ballet in the top image, this spider uses its mimicry to prey on its chosen victim of Green Tree Ants (Oecophylla smaragdina).  Quite a challenge to photograph due to their skitzy behavior, however, I was fortunate to come across a scene in which the spider had just captured an ant and was in the process of hauling it upwards via its abseiling silk line from an above branch.

My favourite Jumping Spider in the Wet Tropics and the Cairns Botanic Gardens are these incredible Green Ant mimics.  Not only physically taking on similar colouration, but their real mastery comes from their ability to copy the pheromone of the ants and live nearby a nest without being detected.  This behaviour is referred to as ‘crypsis’.  These spiders are so incredibly beautiful, I’ve featured them numerous times in my blogs as well as my Disco Bugs Greeting Cards.  I was very lucky to find some in the backyard of a friend’s place when creating that series.  I see these spiders regularly so it’s a great opportunity to see some fantastic mimicry right here in the Cairns Botanic Gardens as well as throughout the Wet Tropics. 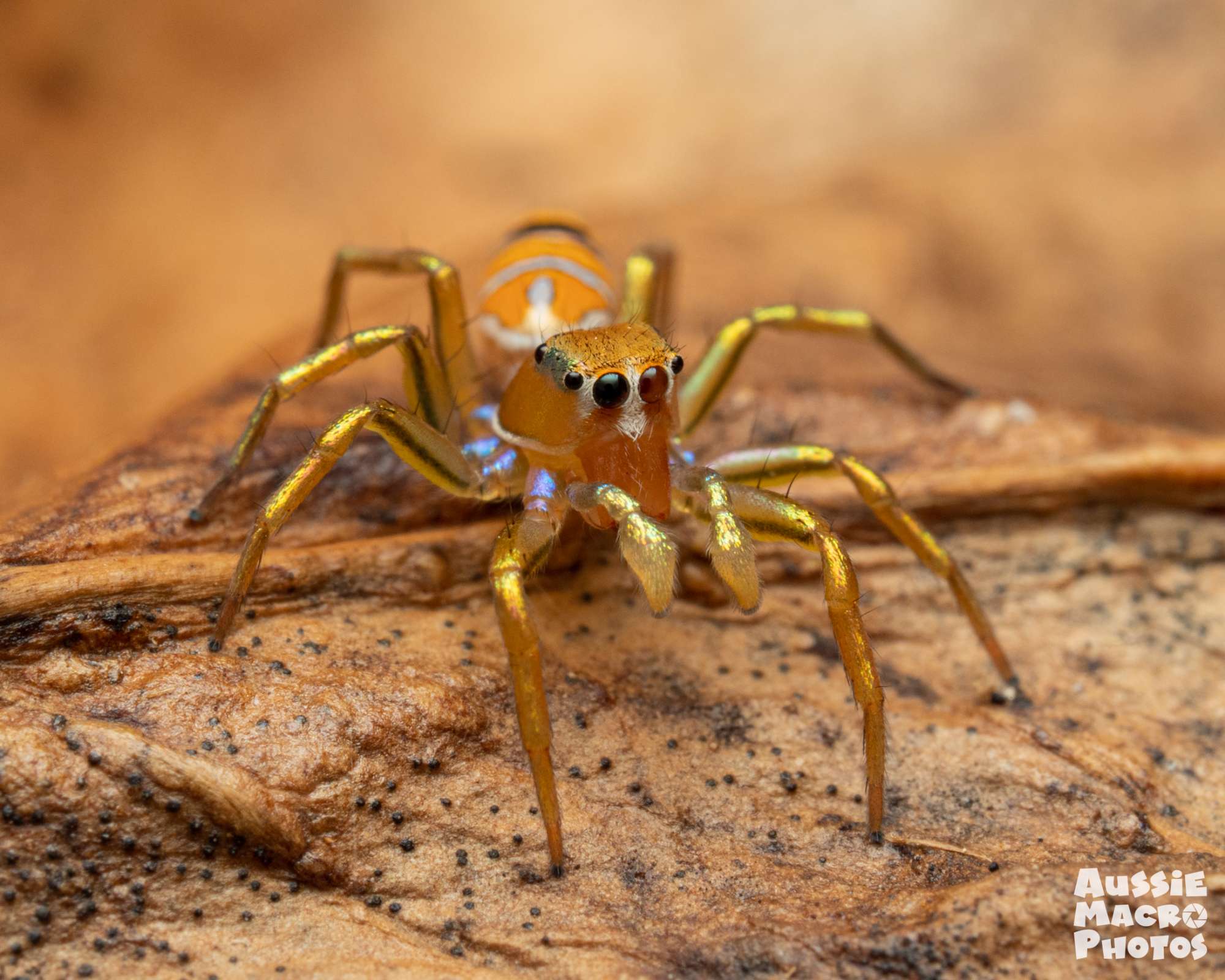 Our next form of mimicry is known as Mimesis Mimicry, also referred to as Masquerade.  This is when the animal takes on the appearance of something inanimate.  There are several moths and katydid species that will take on a leaf-like appearance like what was featured in the November Blog.   There are however some examples of this style of mimicry which is pretty damn gross…brilliant…but gross! 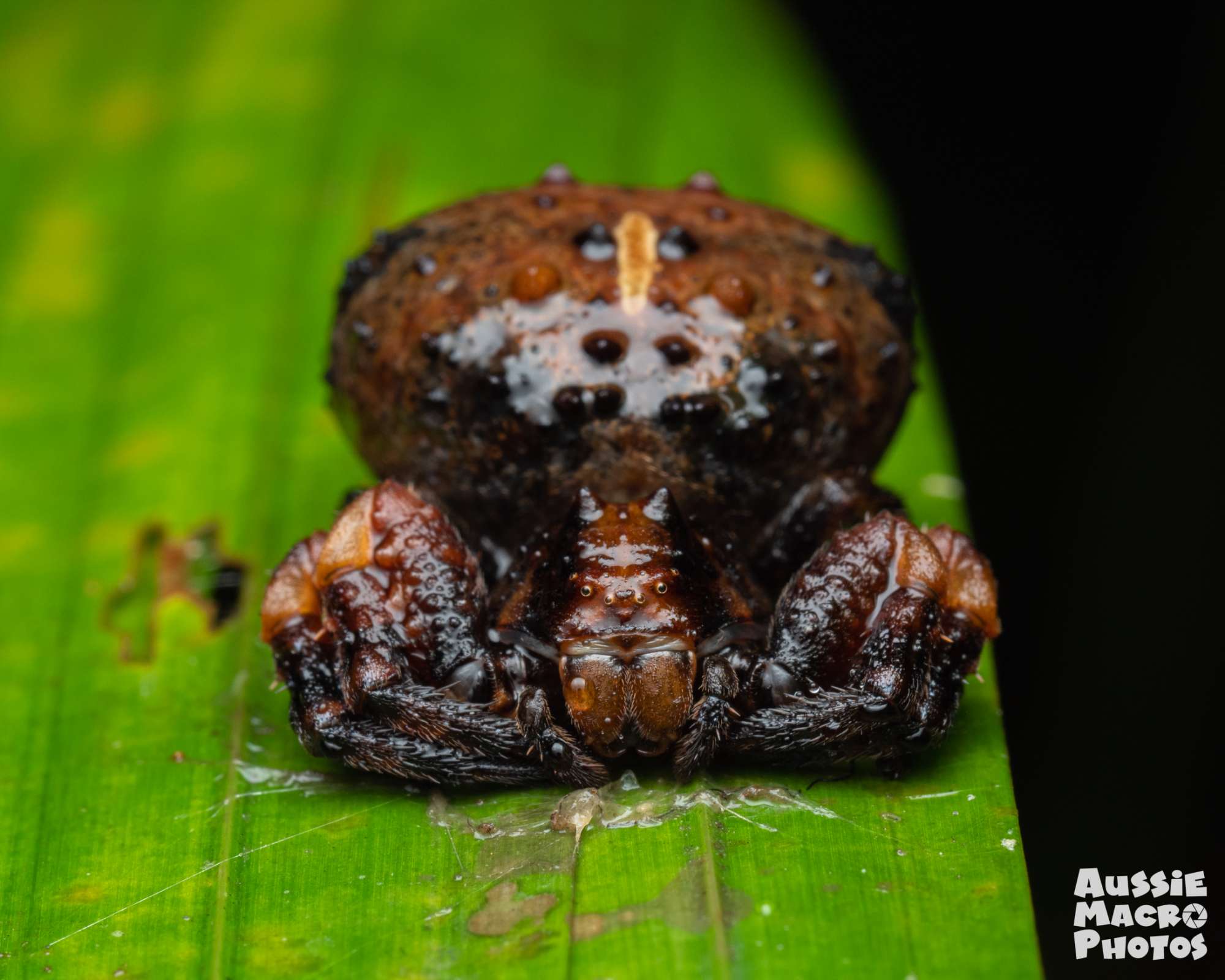 It is clear spiders are one of the best mimics so these next few are just adding to the growing list.

So, it seems that if you are able to make yourself look like bird poo, you are less likely to be eaten…probably by a bird.  A Genus within the Crab Spiders (Thomisidae) Family are fantastic at just that…looking like Bird Droppings.   Bird poo mimicry is created when the spider will produce a poo-spatter, complete with brown and white colouration and lumpy textures, and then sit right in the middle.  Some species will even produce a stink to complete the disguise.

Here are another two species found in the Wet Tropics region.  These are so rarely seen and are possibly undescribed species of Bird Dropping Spiders known as Phrynarachne. 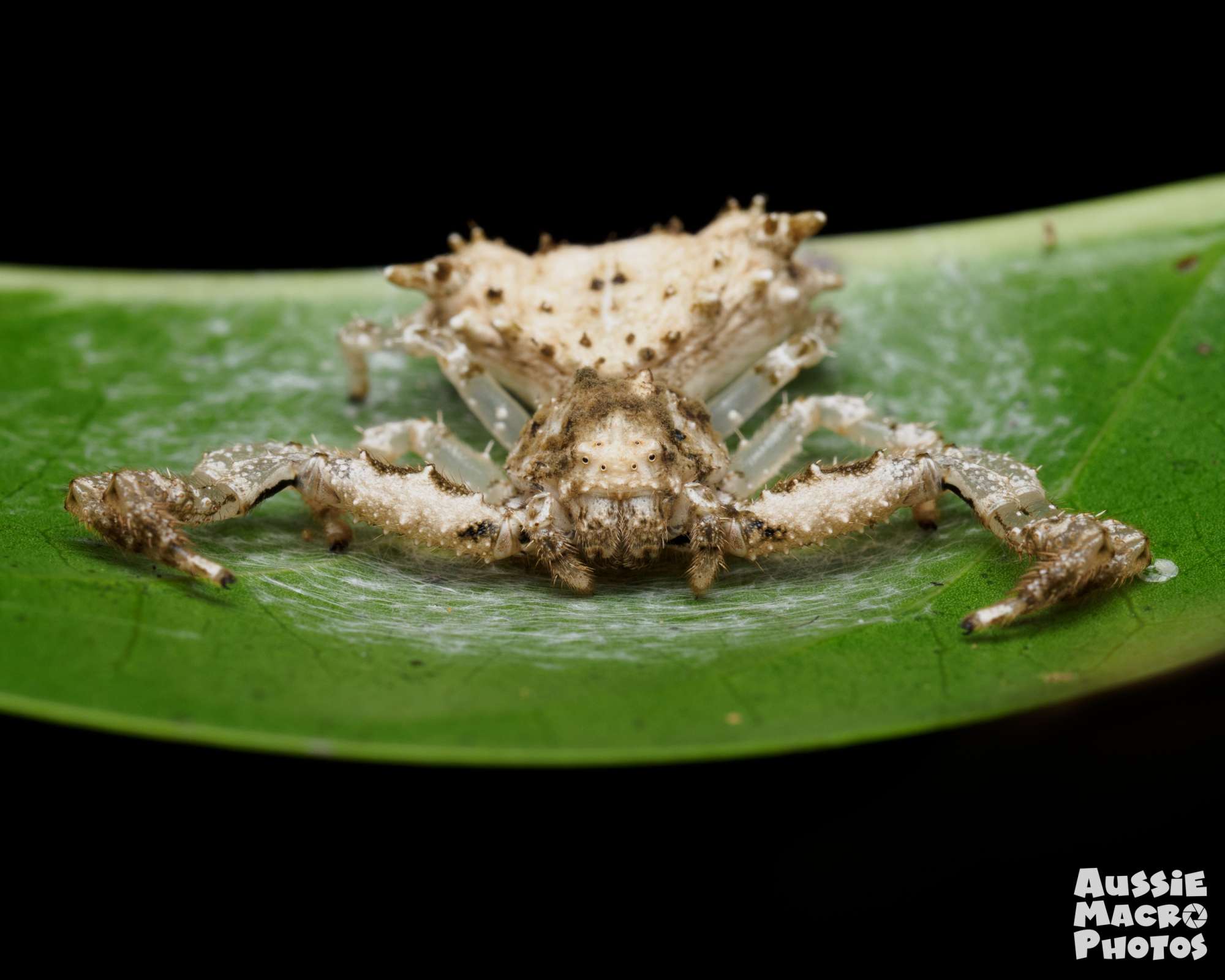 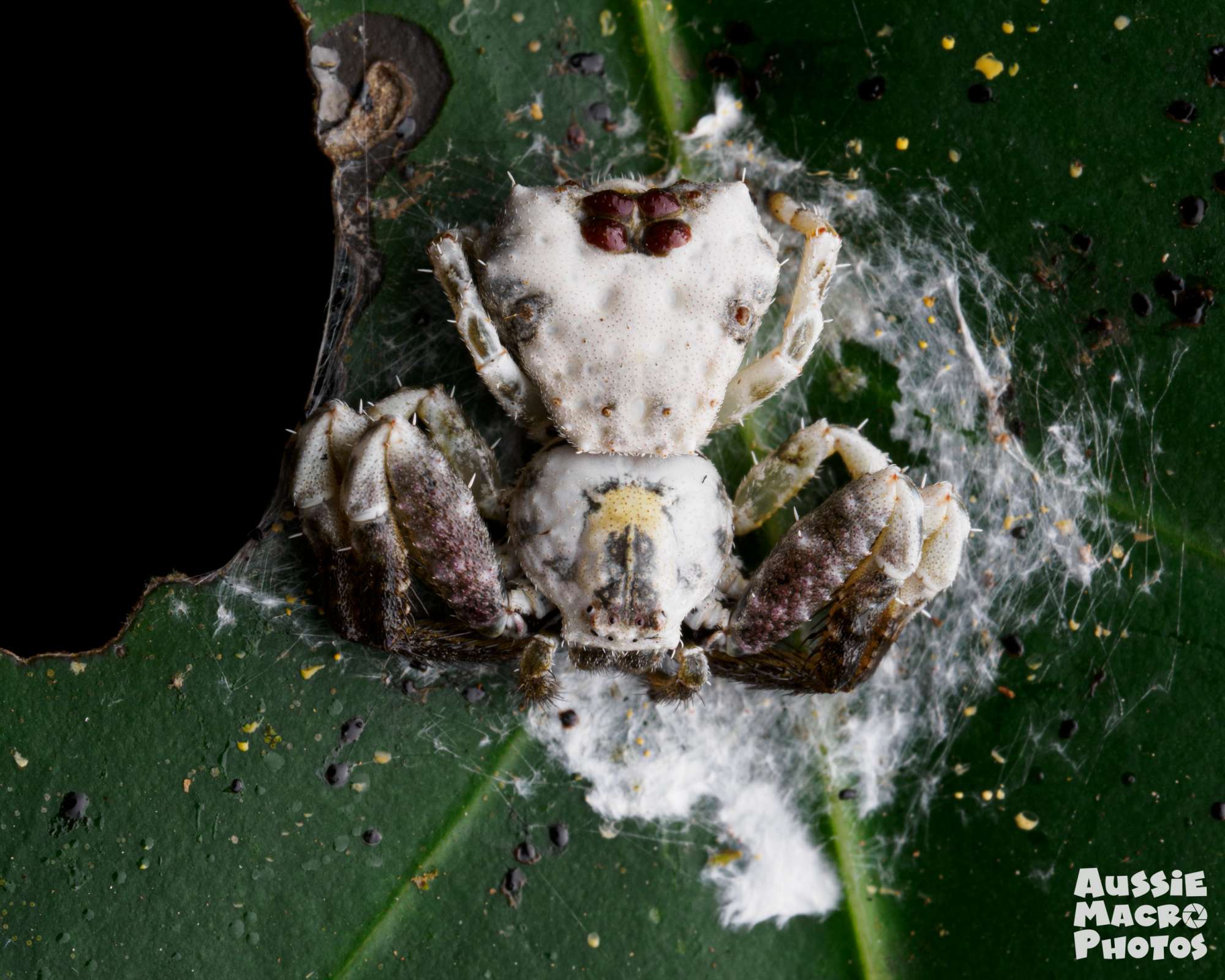 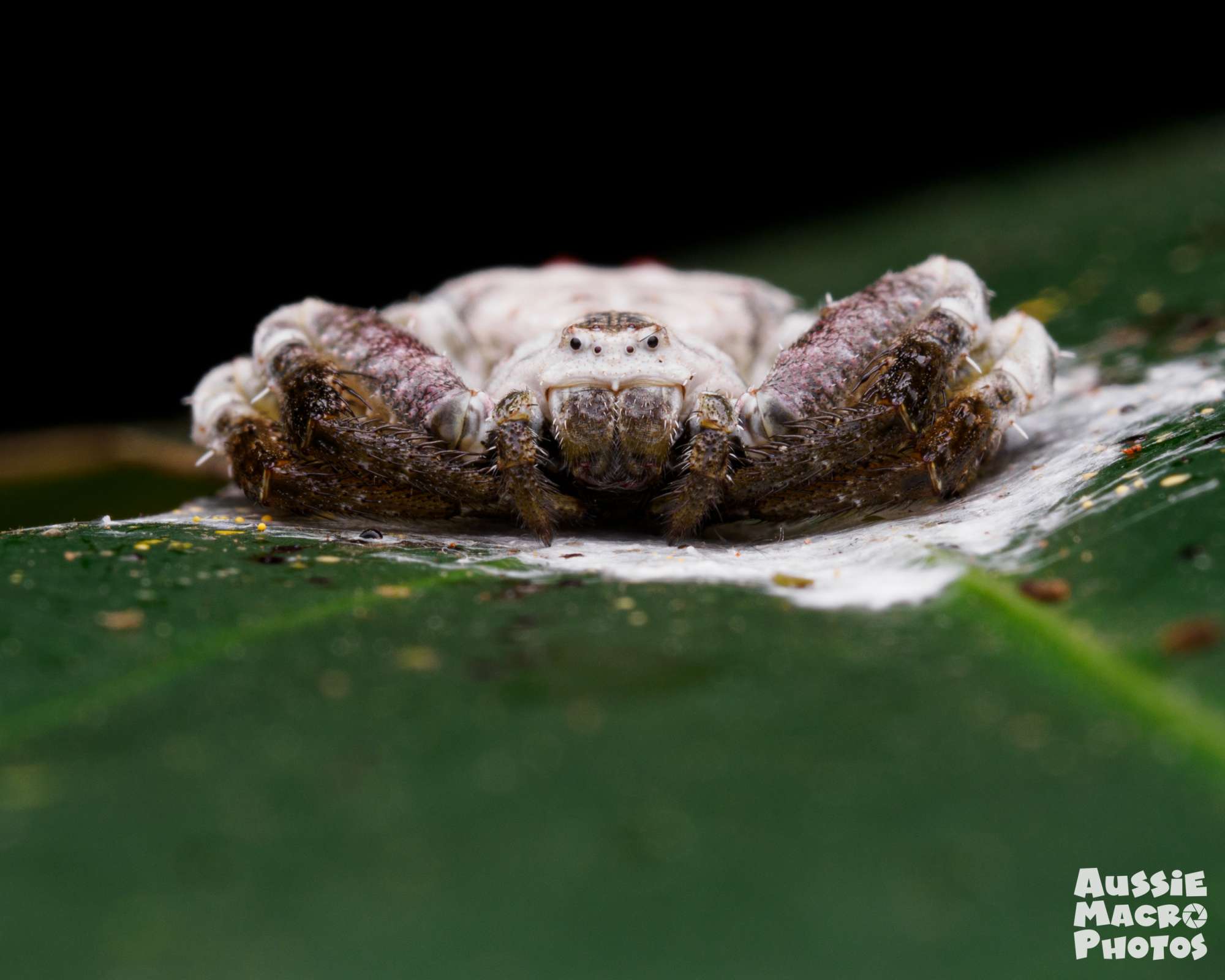 It is theorised that our next spider maybe mimicking the look of glistening water droplets hanging off leaves in the rainforest.  It seems completely feasible to me as they really do glisten as though the sun has hit them.  Their tiny bodies with long legs are extremely challenging to find let alone photograph.  Luckily for participants on Let’s Go Buggin Night Walks, these masters of mimicry can be seen all year round in the Cairns Botanic Gardens. Their silver-lined abdomens is the result of a digestion bi-product, known as ‘guanine’ that lines the inside of the abdomen instead of being excreted.   Surely, this is the fanciest looking ‘poo’ that planet earth as created!

Our next style, Batesian mimicry, was named after the English naturalist Henry Walter Bates after his work on Brazilian rainforest butterflies.   This sub-genre of mimicry is when a harmless species will assume the appearance of a more harmful species.  Another way of saying this is a vulnerable species may adopt the look of another species that is more powerful with poisons, toxins or a strong defense.

I recently had an encounter with this species of Longicorn Beetle that mimics a wasp.  Wasps certainly have a nasty venom that is a powerful tool for a predator and therefore mimicking such a creature must be advantageous in the game to avoid their own predators. 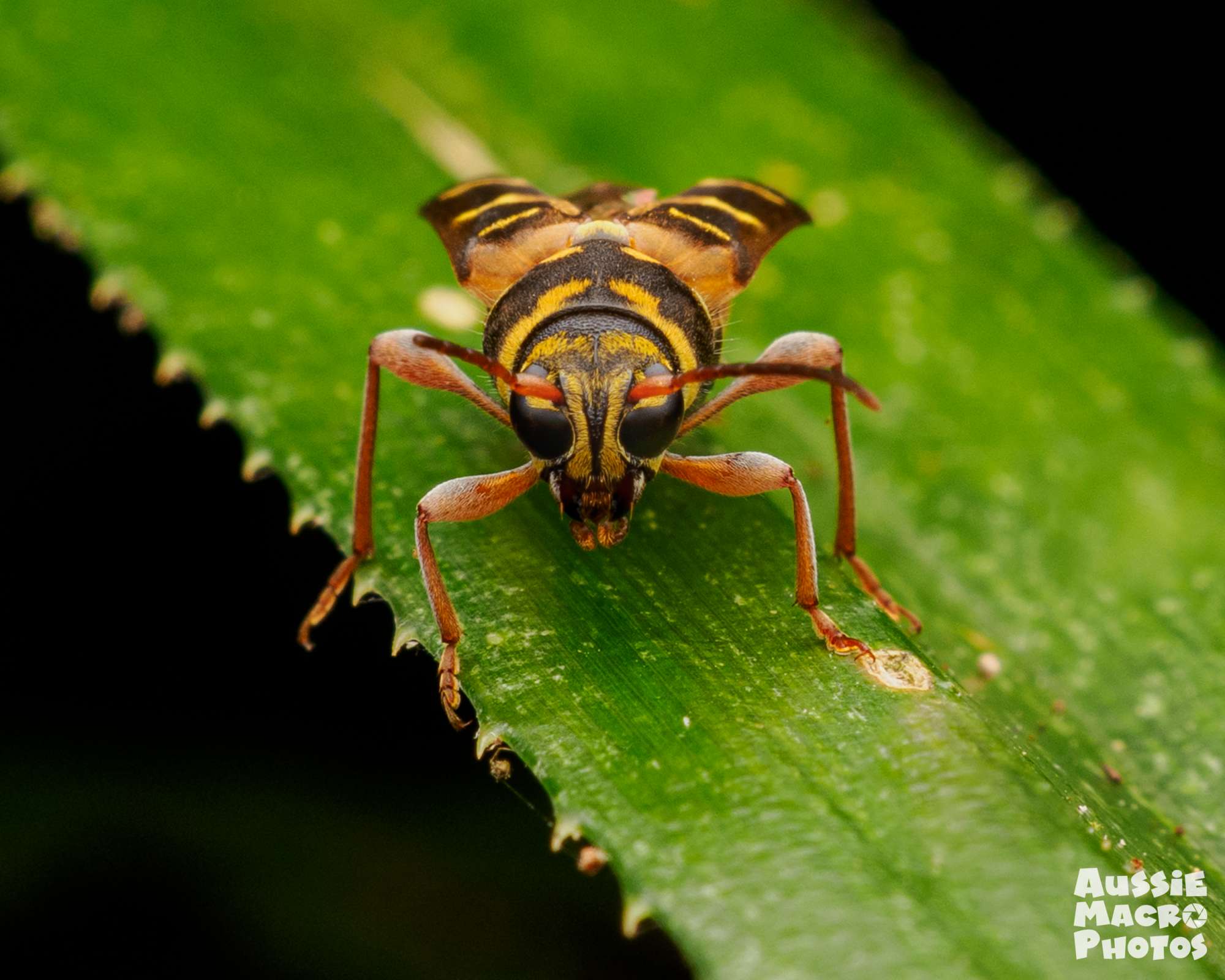 This Genus of Jumping Spiders (Salticidae) are ant mimics.  They too fall into the Batesian Mimicry category with their ant-like appearance allowing them to be feared as a more dangerous species.  The Genus of Myrmarachne is the biggest in the whole of the Salticidae (Jumping Spider) family with over 200 species.  It’s clearly a very successful evolutionary tactic with so many species following the same path.

There are other examples of mimicry which will be the subject of another blog another time.  This has certainly been an awesome learning blog for me and I’ve learned a lot from undertaking the research.  I hope you found it interesting and you got something out of it as well!  Please leave me a comment if you have any questions or comments on the article.

Would you like to see some of these critters showing off their mimicry firsthand in the Cairns Botanic Gardens on a Let’s Go Buggin Tour?  Use ‘blog’ as the coupon code for 20% discount on your tour booking.

Wishing you all a lovely holiday season!

Next Blog in late January.