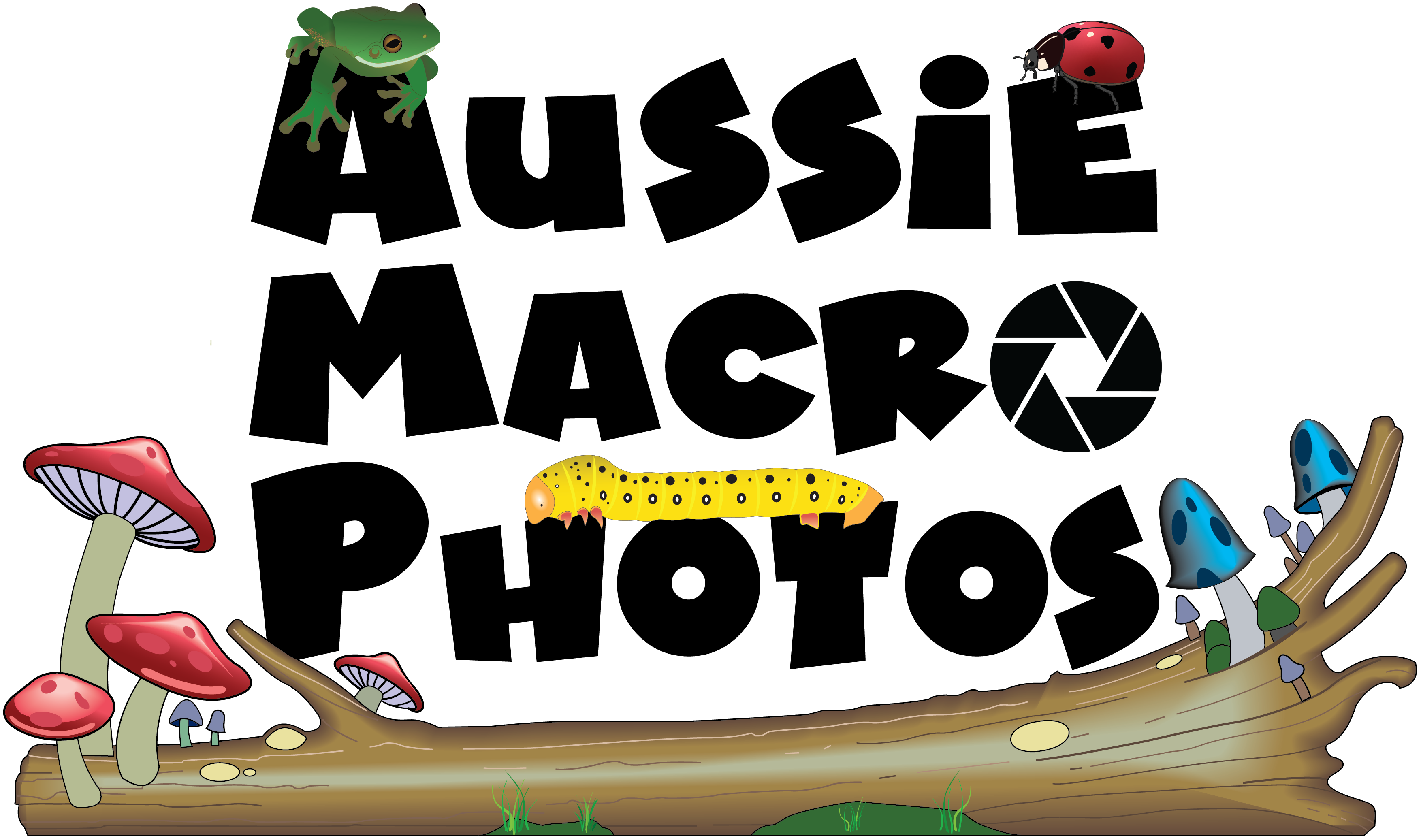 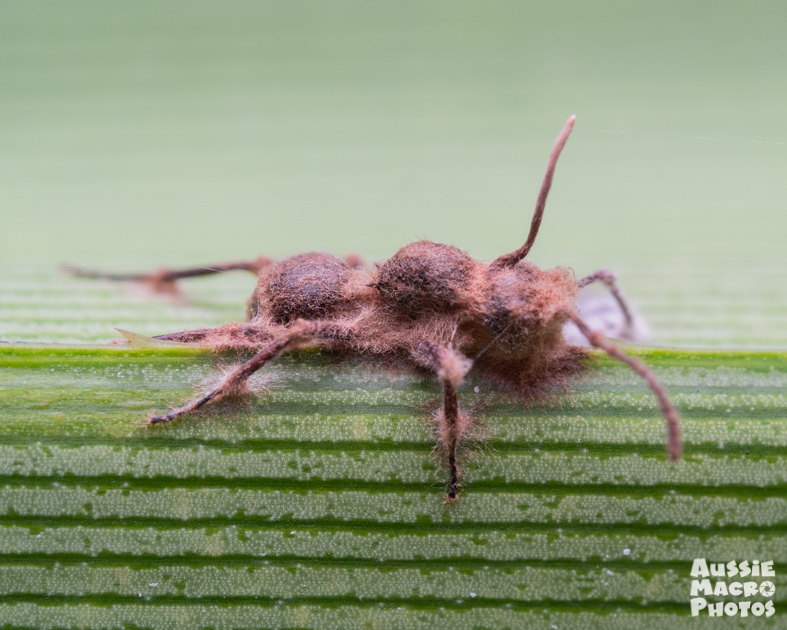 Formicine Ant with Cordyceps.  Notice the spore spire erected from the head.

Over the years I have witnessed a substantial number of Cordyceps fungi here in the Wet Tropics of North Queensland, so I thought it was time to share a little bit about them.  These amazing fungi leave many people in jaw-dropping awe when I explain their life cycle so thought it would be a worthy blog subject, especially as we are about to have Halloween!

I first heard about Cordyceps watching David Attenborough documentaries and was truly fascinated with the science-fiction inspiring story of this parasitic fungi.  Check out a video here:

So a few basic details about Cordyceps…they are genus of parasitic fungi (Entomopathogenic) that include around 600 identified species.  They are generally found in the tropical forests of the world, mostly located throughout Austral-Asia.  Their name is derived from Latin and Greek words meaning ‘club’ and ‘head’.  They are commonly referred to as Zombie Fungi due to their effect on animals in the rainforest.

Cordyceps Fungi has been used for many years in some cultures for medicinal purposes.  There are reports that ingesting Cordyceps may show benefits of energy and stamina, cancer fighting properties, detoxification of the liver and kidneys, fight against asthma and increase libido.   They are also known to be a adaptogenic, and thus can be known to benefit the human body in a variety of ways depending on any ailment or disease.  If you wish to look into the medicinal effects of cordyceps I invite you to do your own research and there are plenty of products available to purchase online or at your local health food store.

In the natural world, Cordyceps in an infected host animal can influence the victims behaviour to the desired outcome of the fungi.  For example an ant that has been infected by cordyceps has an uncontrollable urge to climb as high as possible, usually in a position above other potential victims and then bite down on a stem to anchor itself before it dies.  Over the next few weeks the fungi will emerge from the host’s body and usually grow a spore stem out of the animals head.

One of my first encounters of this amazing fungi is when I was in my favorite spots to take macro photographs in the Cairns Botanic Gardens called ‘Bug Alley’.   I noticed a large Bullet Ant acting strangely, walking erratically in circles, wiping its face and looking disoriented.  I got a few shots of it unknowingly witnessing the ants last hours of life.  The next day I went back to Bug Alley and found that the ant was dead in a position having bitten down on the leaf where I last saw it circling.   The next day I returned and found that some white fungi has started to emerge from its limbs.  Over the coming weeks I watched the cordyceps grow outwards from the ant. 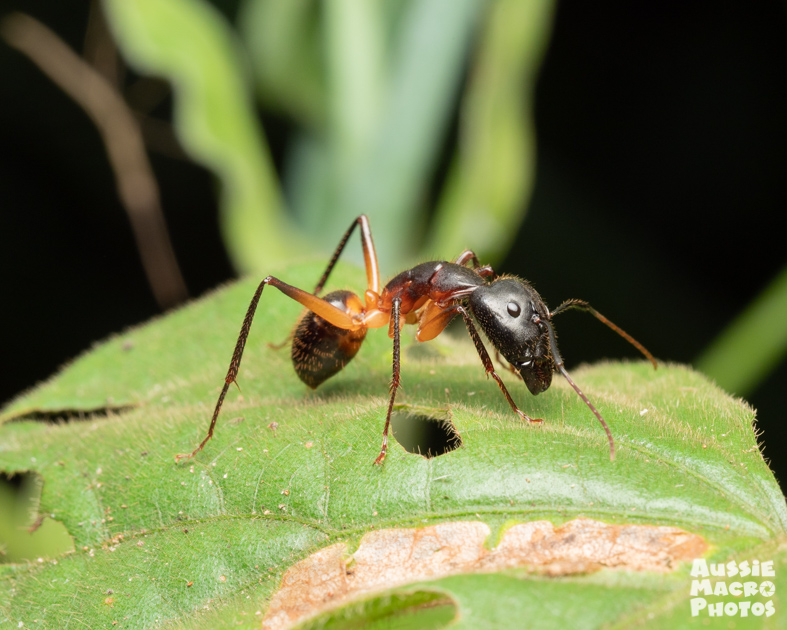 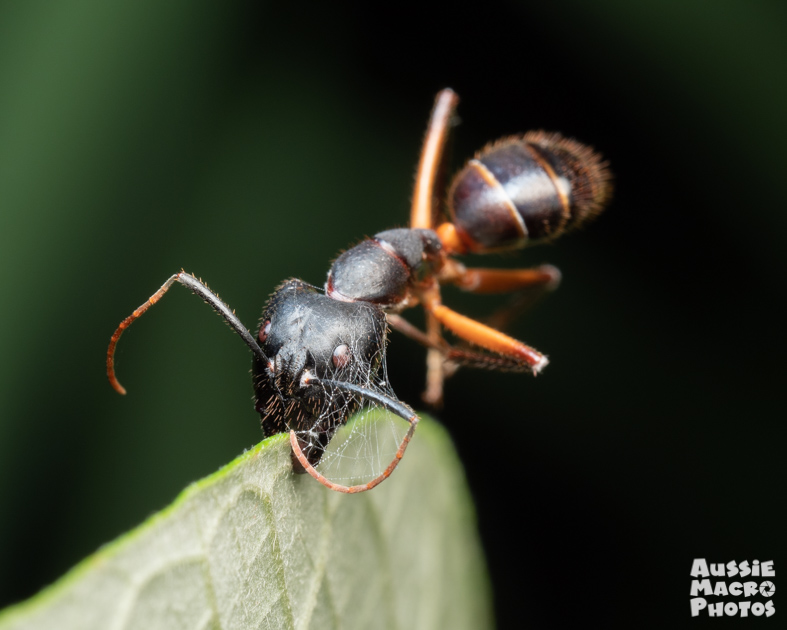 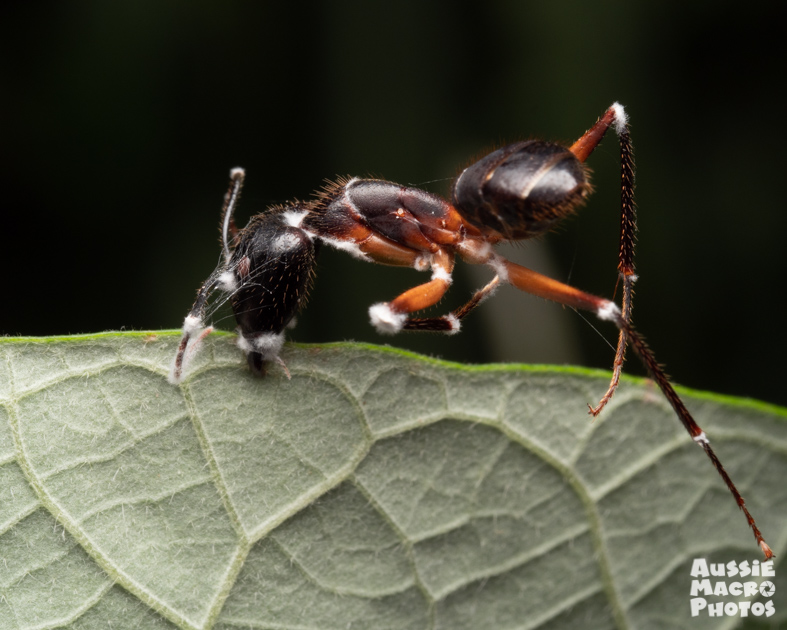 Series of images taken of infected Bullet Ant infected with Cordyceps.  The first is while the individual is still alive, then the next day and about a week later.

One particular species of Cordyceps that preys on spiders is called gibellula.  I’ve seen several examples of this distinctive white bleached-coral-like formations.  Once I find an example of this on my tour route it offers mind-blowing concepts to tour participants, especially if they are hearing about Cordyceps for the first time.   It is legitimately some nightmare-inducing, X Files, Sci-fi shit! 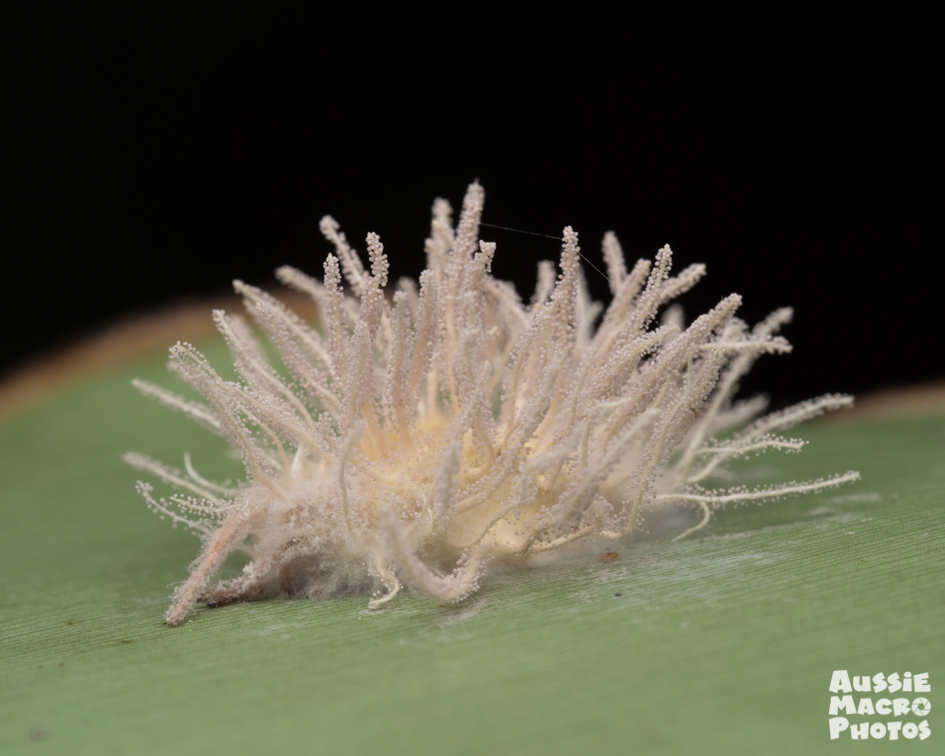 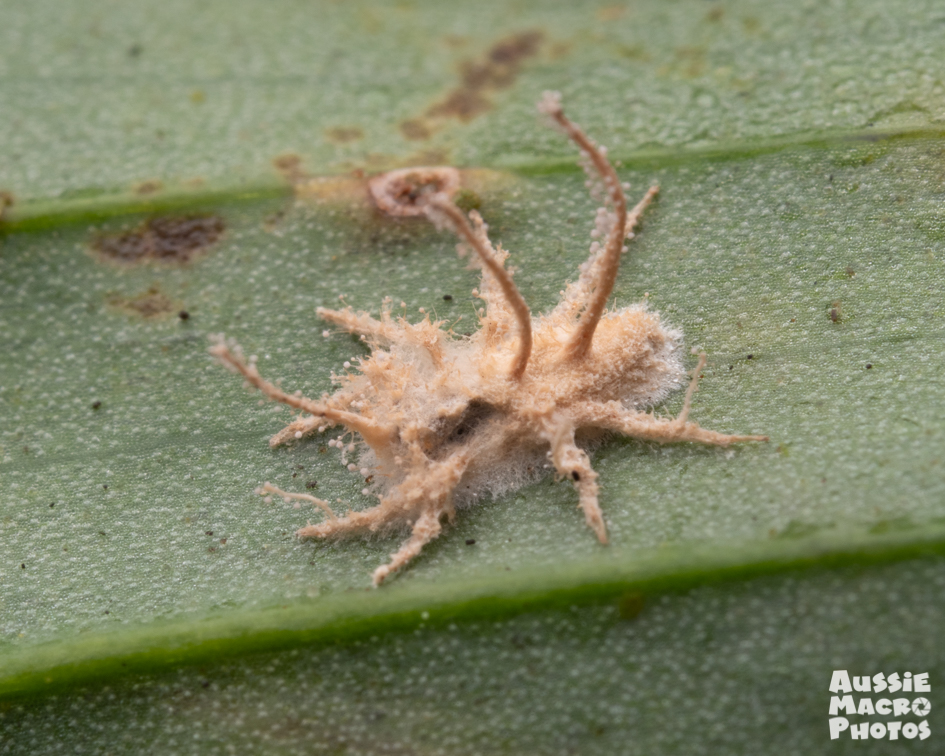 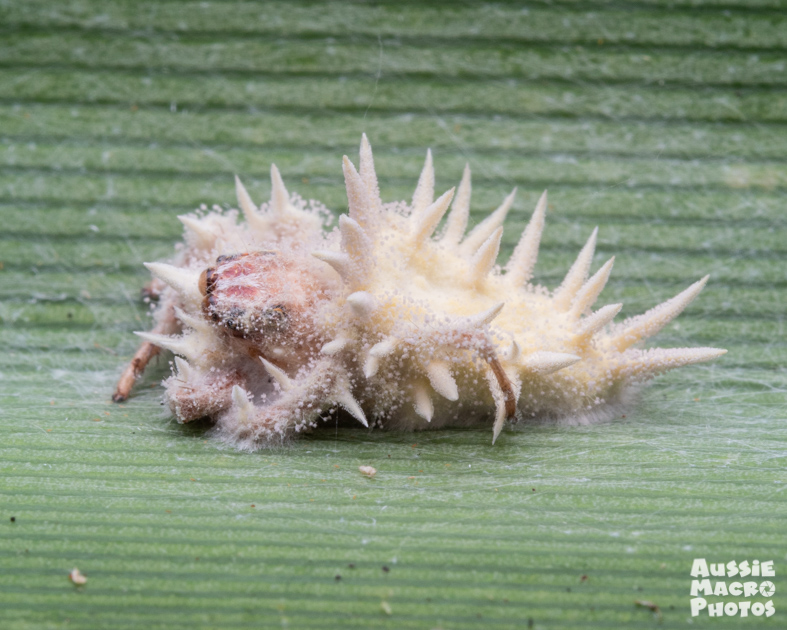 Over the years I’ve seen moths, cicadas, hoppers and many ants fall victim of this clever parasitic fungi.   Below are just a few examples. 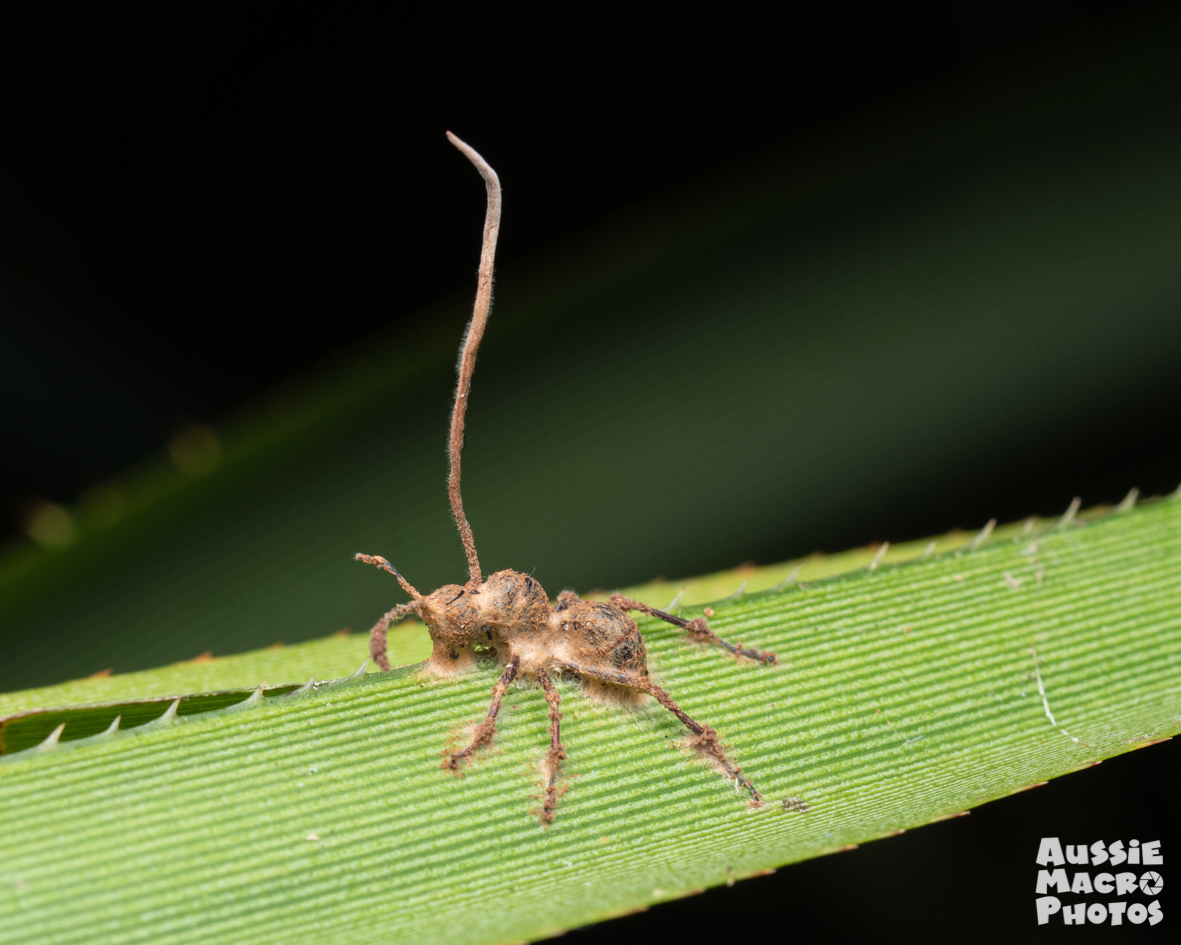 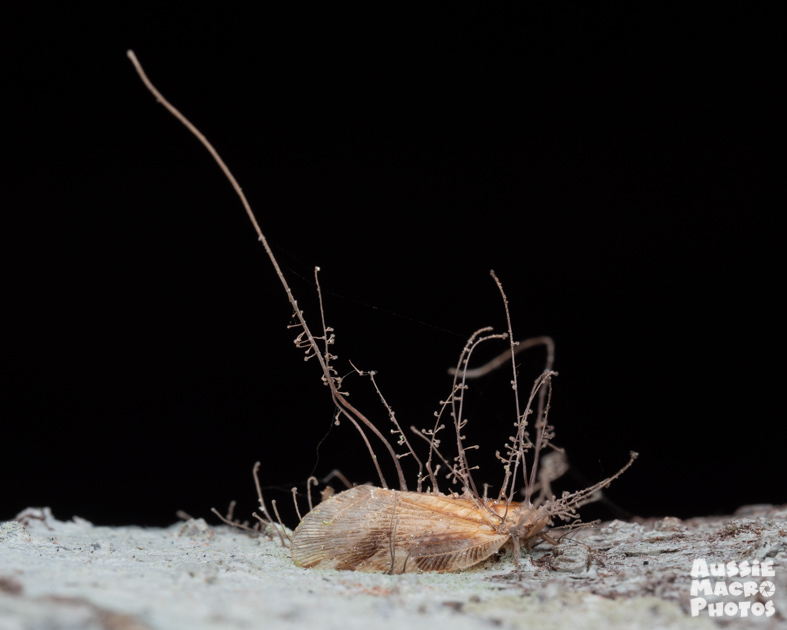 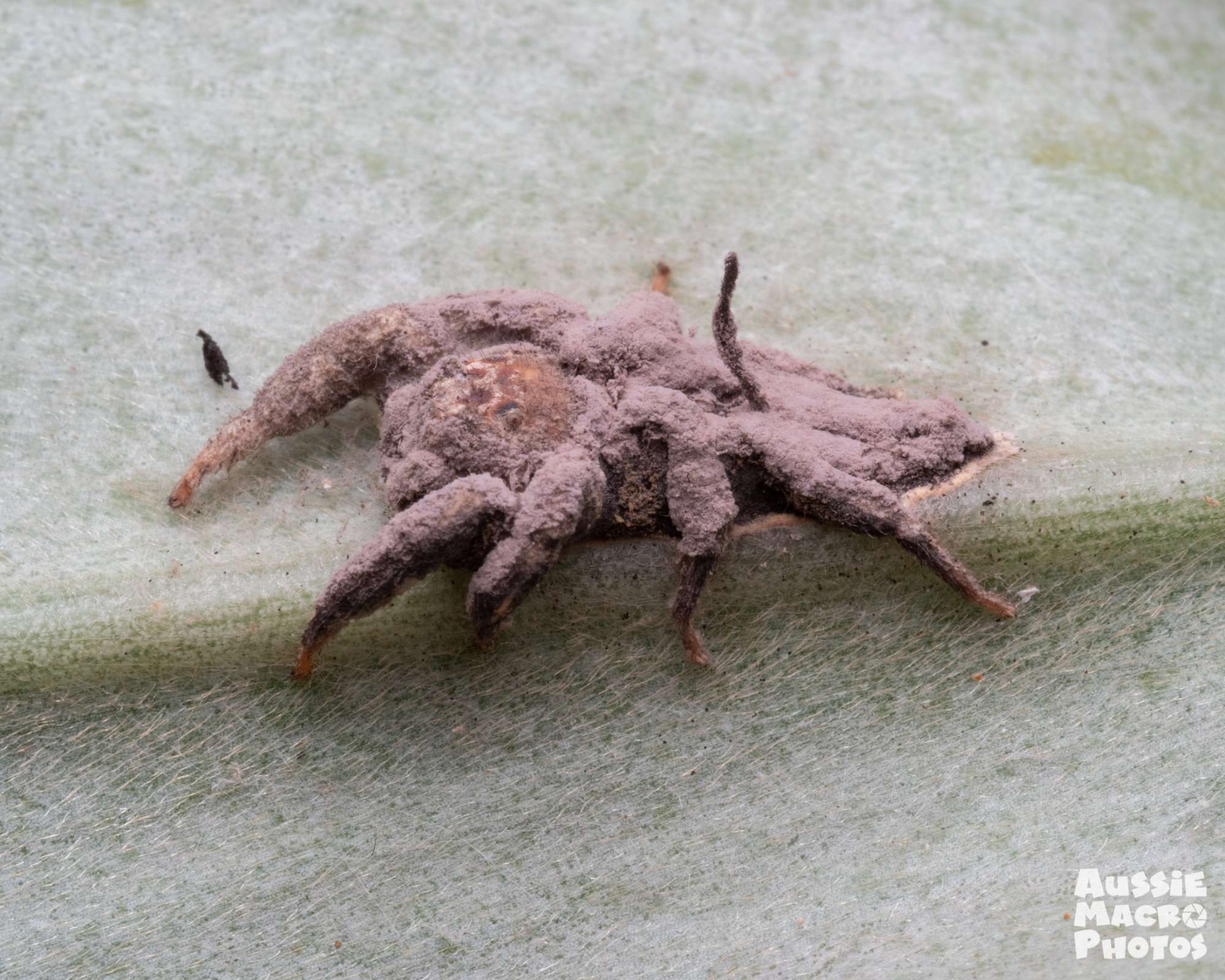 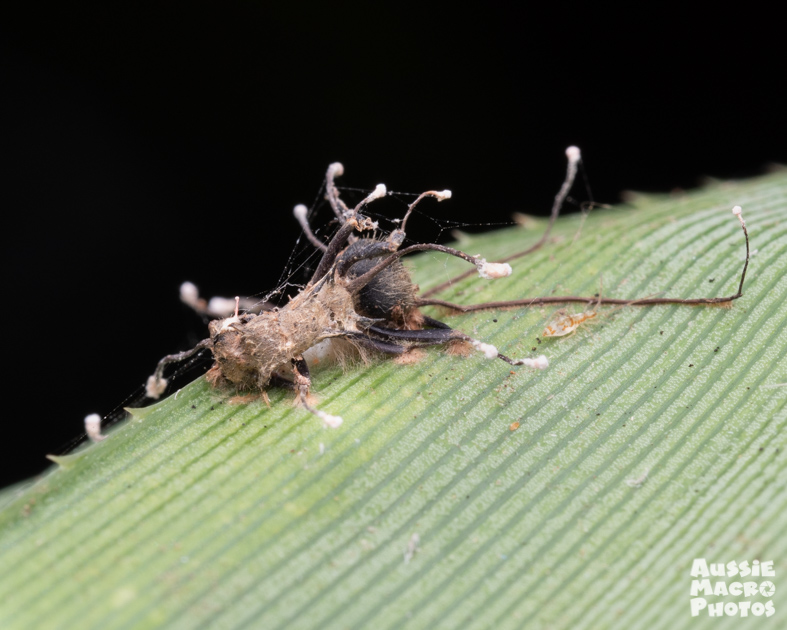 Cordyceps infected Ant, Planthopper, Jumping Spider and… your guess is as good as mine…I think it’s an ant.

So if you are keen to see some Cordyceps, look out for these tiny examples next time you are out and about in your tropical rainforest, or tell me when you are on your next Let’s Go Buggin Tour.