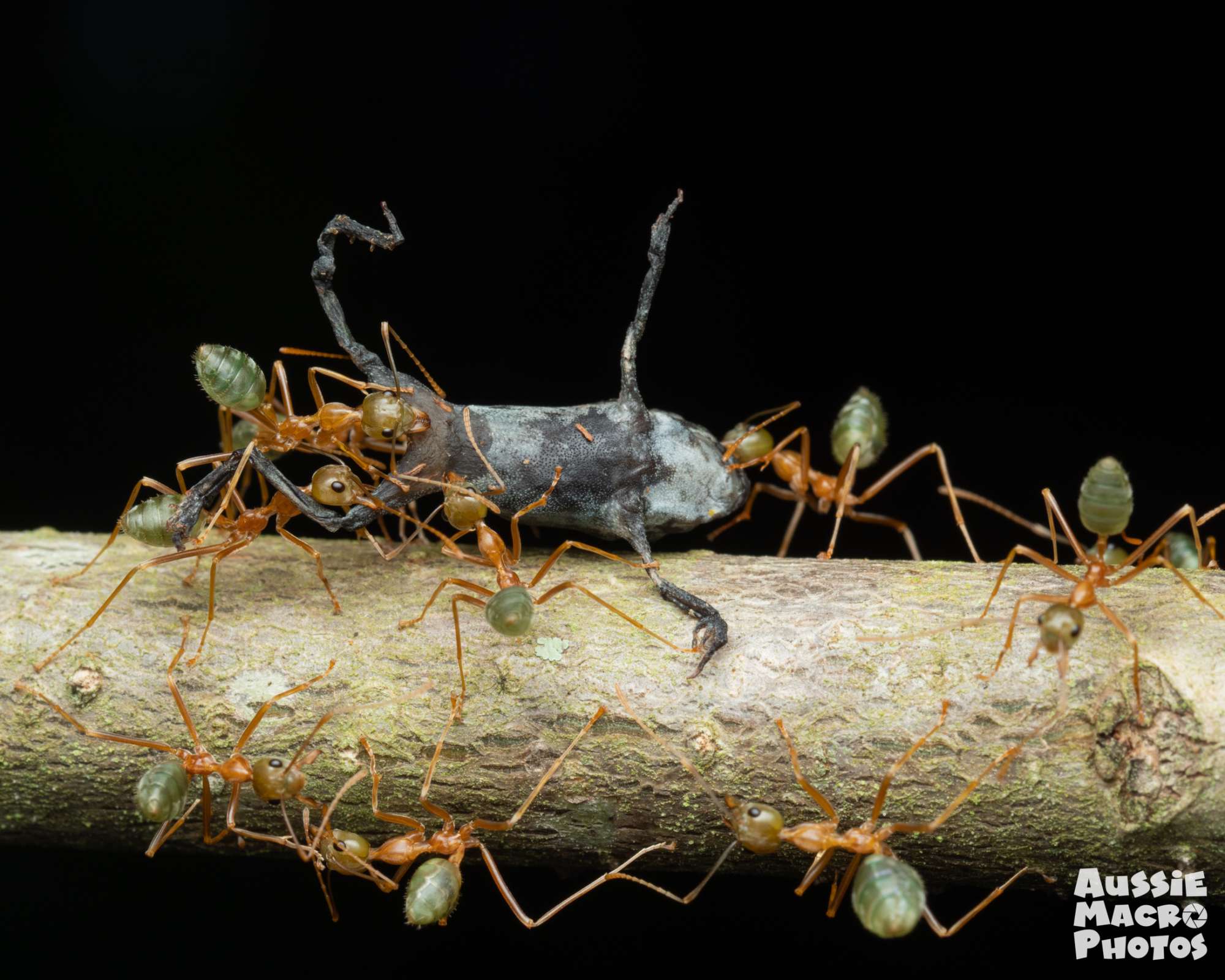 It’s that time of year again when we celebrate all things considered ghoulish by some… spiders, bugs and all manner of creepy crawly things.  I’ve been collecting some ‘Halloween-esc’ type images over the year to share now.   These are some images, that I wouldn’t normally post due to them being somewhat gruesome….  It’s true nature can be cruel and brutal… and nature doesn’t take sides.

Many people are not a fan of Green Tree Ants (Oecophylla smaragdina), probably because they are quite aggressive little ants that will bite you if you happen to get close enough to where they are hanging out, and especially if that happens to be close to where their nest is.  They will sacrifice themselves to protect their nest and their queen.   Also, many people dislike Cane Toads…they are an unattractive invasive species that can kill pets and our native wildlife with toxins that if injested can be fatal.   So, I get that they are not easy to love… so how about this scenario…  A colony of Green Tree Ants with a Cane Toad baby victim, that they are hauling back to their nest!?

While we are on the subject of Green Tree Ants, here is another gruesome scenario I managed to witness in the act.   This is a Tent spider (Cyrtaphora exanthematica) with a Queen Green Tree Ant in its clutches and in the process of dying.   This was actually pretty heart wrenching to watch as the ant was still alive and I’m sure it looked at me a few times in desperation.

What Halloween-inspired Blog would be complete without the mention of Zombie Fungi?  Last year my October Blog was all about Cordyceps Fungi (read here).  Continuing on the subject of Green Tree Ants, I found this Queen who had succumbed to this entomopathogenic fungi.  For those now aware of this rainforest killer, it is a fungi that animals may come into contact with its spores, thus the journey to become a zombie has begun.  The spores make its way into the insects brain, causing a hostile cognitive takeover, and forcing the animal to seek a spot, usually over a thoroughfare of other potential victims, where the insect bites or clamps down before dying and then the fungi spurts out from different parts of its body. 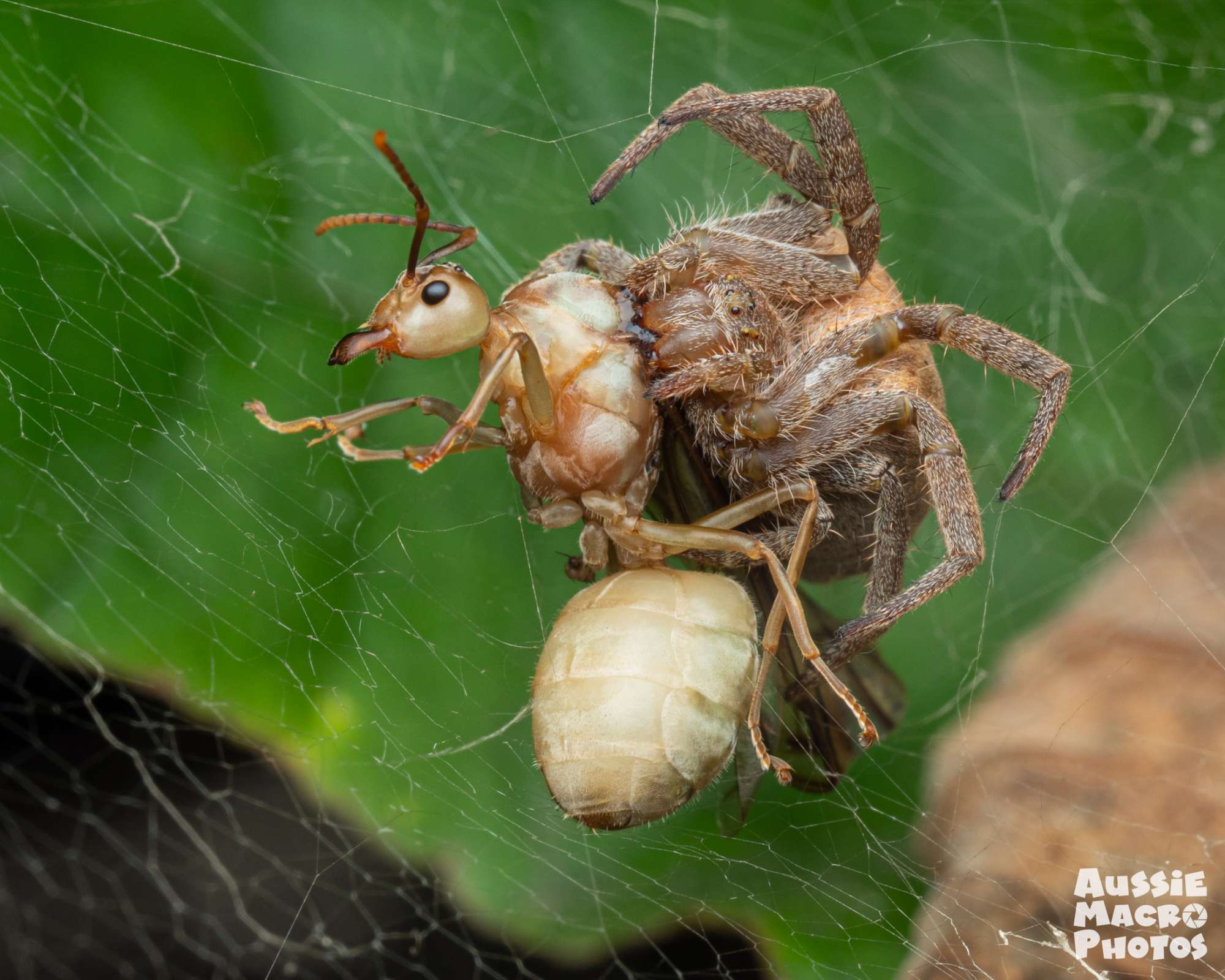 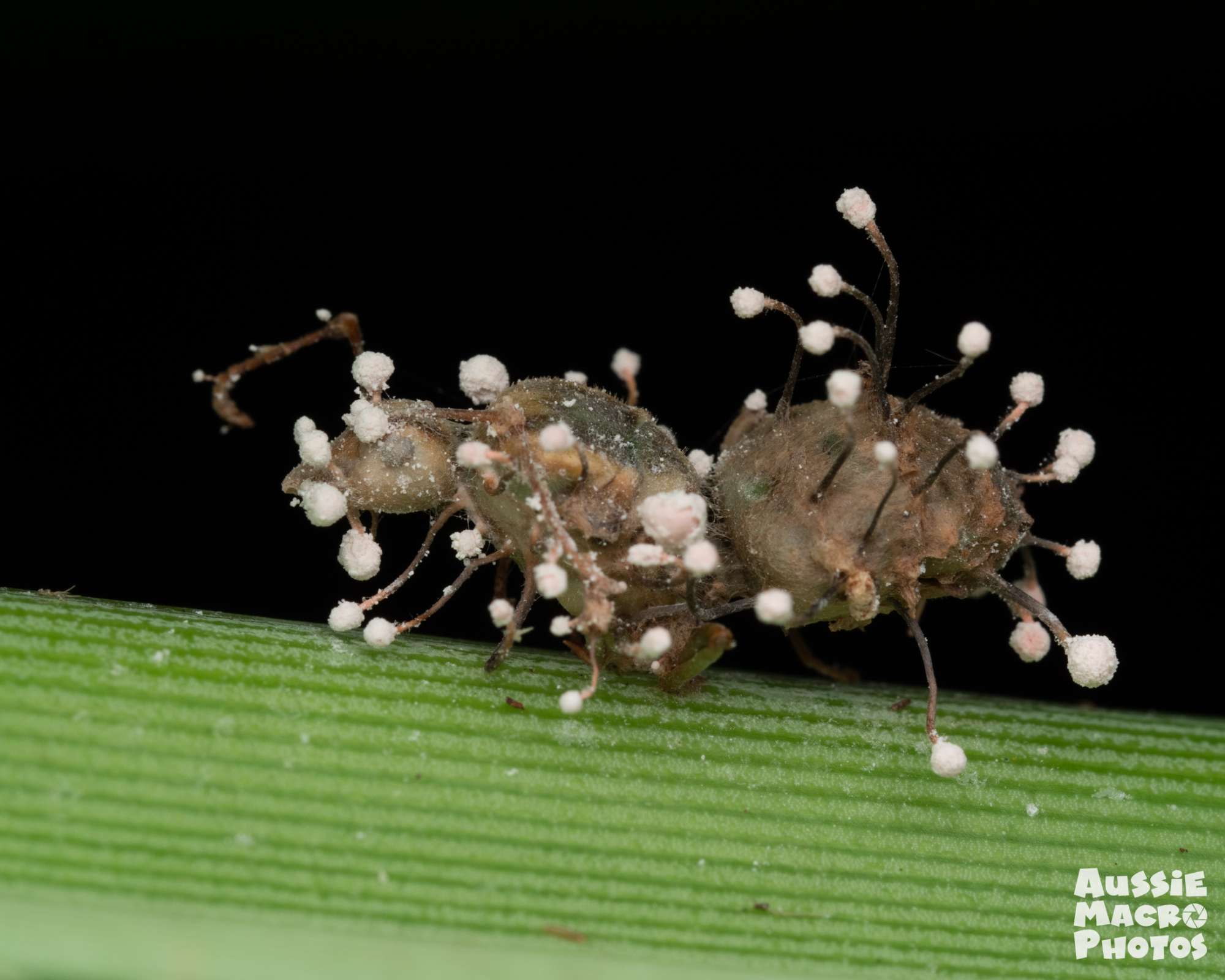 Moving on from Green Tree Ants, this image was taken last wet season.  Those young Millepedes have gathered on top of a mushroom just remind me of worms on a brain.  Not really much else to say except… brains…brains… (in zombie-like voice).

These next four images are included simply because they are really only the faces that a mother could love.  The first being a Whip Scorpion (Charinus pescotti), who are neither a spider or a scorpion but belong to their own separate order of Amblypygi.  These creatures are usually ground dwellers and are non-venomous.  This shot was one of my first tries at an in-camera focus stack of 10 images.  I like the water droplets on its head which look like its eyes.

There’s something about red eyes that conjures up the idea of evil.  Combined with a spider that can sit with its eight legs resting on the side of its head just takes it the next level of so-called ‘creepy’.   This is a Garden Orb-weaver called an Abandoned Web Orb-weaver (Parawixia dehaani) and was spotted next to the rainforest boardwalk of the Cairns Botanic Gardens. 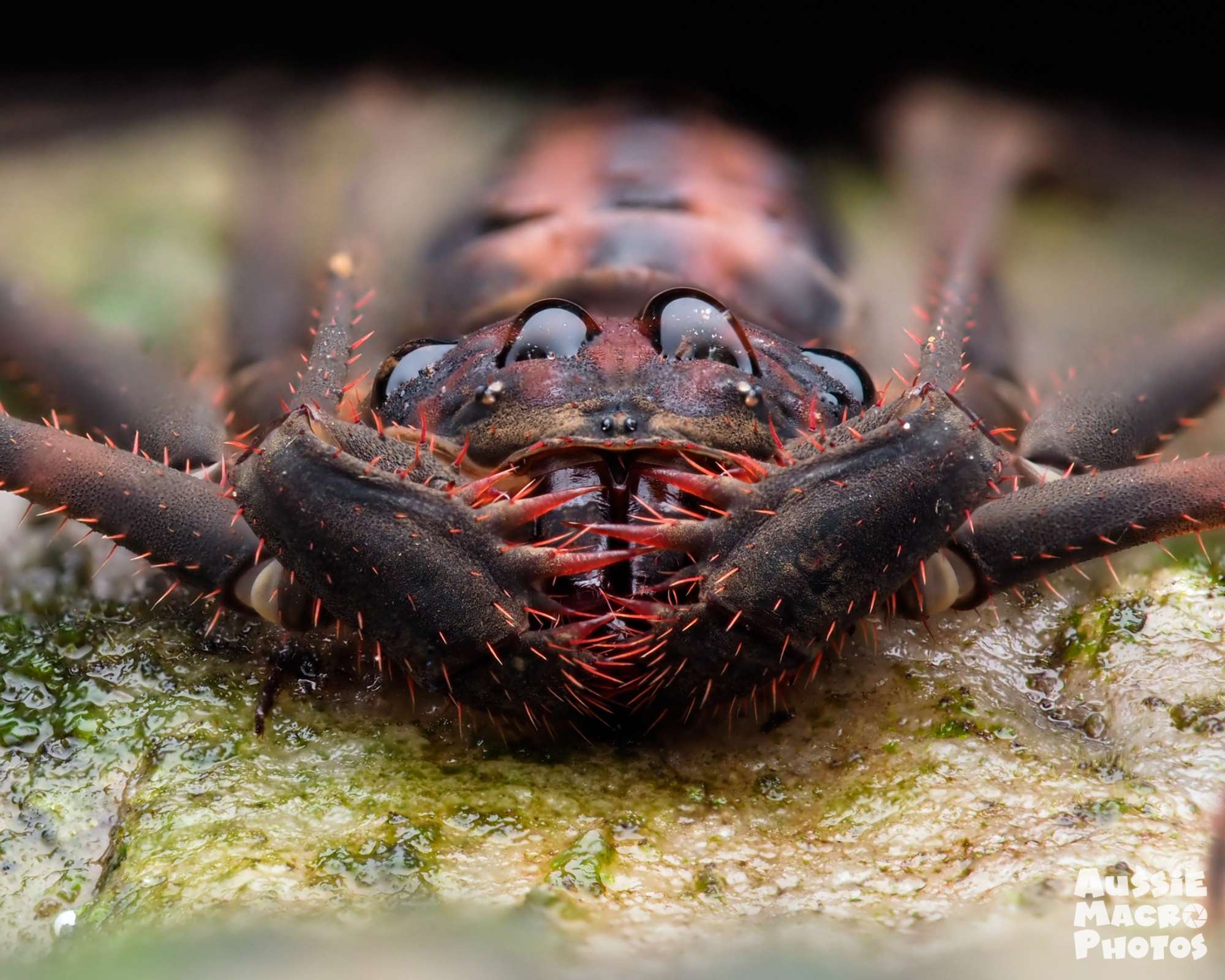 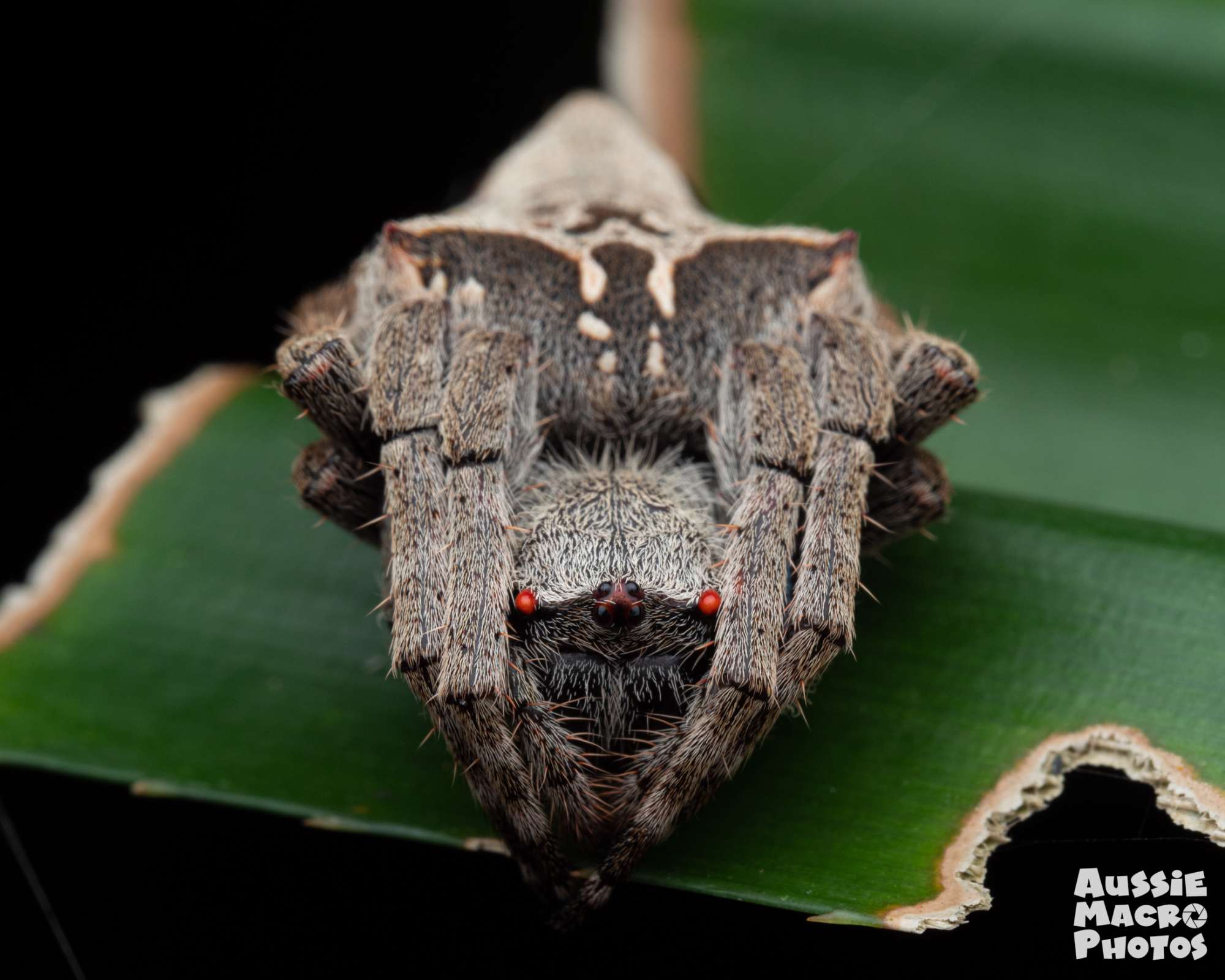 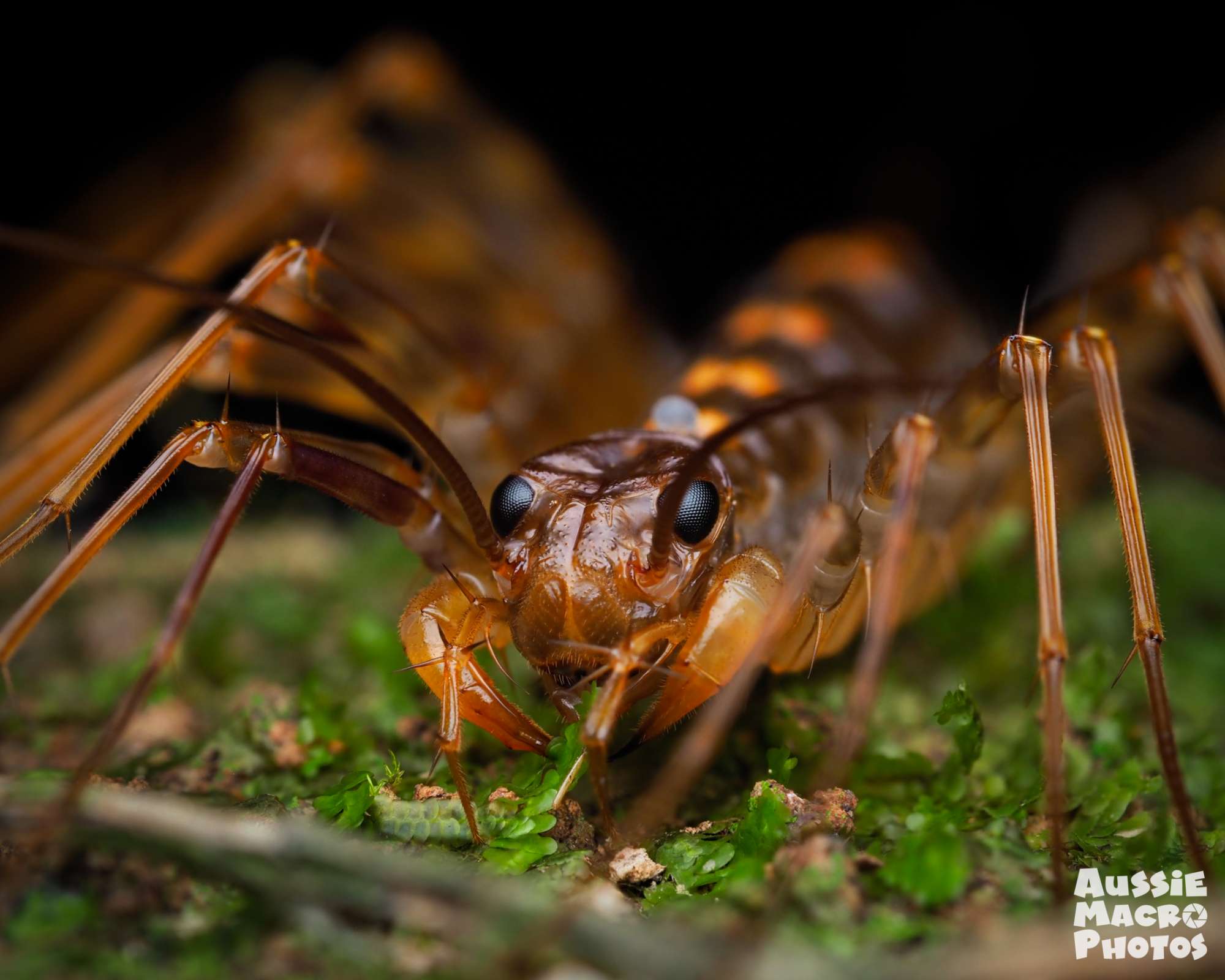 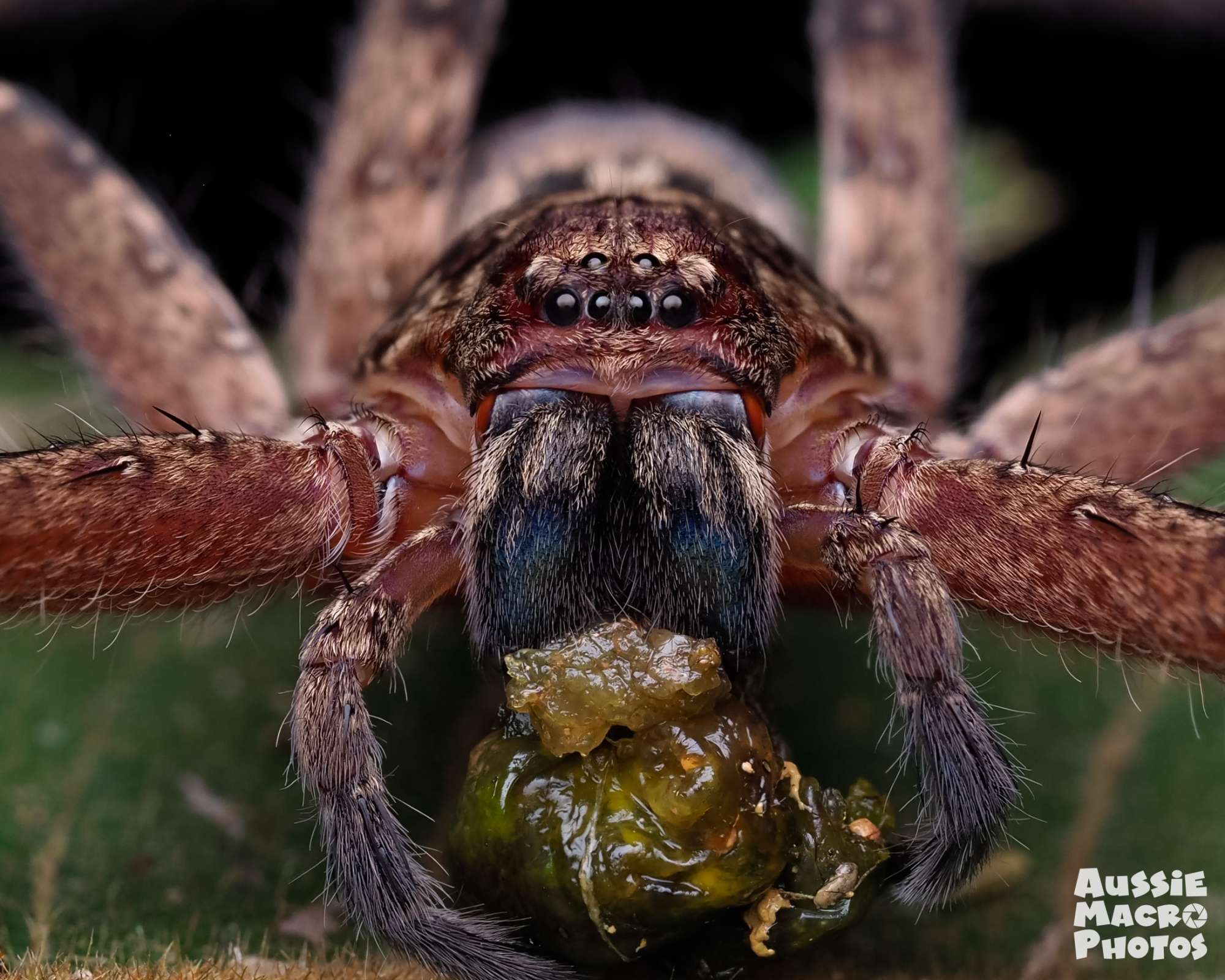 This super creepy crawly creature is a House Centipede (Scutigera coleoptrata).  They are non-native arachnids originally from the Mediterranean but are now known to be on every continent except Antarctica.  They can have up to 15 pairs of legs and with their antennae, they can be around 15 centimeters long.  They are not thought to be aggressive or dangerous to humans.

This is the Wet Tropics’ most common Huntsman Spider, called a Jungle Huntsman (Heteropoda jugulans).  The majority of spiders we see on Let’s Go Buggin Night Walks is this species.  This one has been chowing down on its meal for a little bit as you can see its all mushy and mostly pre-digested.   Mmmmnn yummy!!

There are sometimes that I come across a scene and I struggle emotionally with what I am seeing…this scene was indeed one of those times.   A resident White-lip tree frog (Litoria infrafrenata) was peacefully living in the backyard.  I would often see her hanging out on the elephant ear palms around the pool.  One day I heard a screaming sound coming from the backyard and went to investigate.  It was a sound I hadn’t heard before and to me sounded like an animal in distress.  I followed the sound to the pool yard up a Palm tree and saw a Green Tree Snake has snagged the frog.  The screams the frog made were truly heart-wrenching.  I was devastated that my backyard buddy was being consumed in front of my eyes.   I couldn’t do anything about the situation but rationally I knew it was nature playing out in front of me.  I paced up and down having an emotional breakdown, tears streaming from my eyes…the only thing I could do was get my camera and take a few shots.  Up until now, I haven’t had the inspiration to share them… but if there ever was a time this is it.  Happy Halloween!  Truthfully, I was really disturbed by this experience and haunted for days.  About a week later I saw another tree snake moving in on another frog outside my bedroom window… this time I was able to intervene and I was able to save the frog that day. 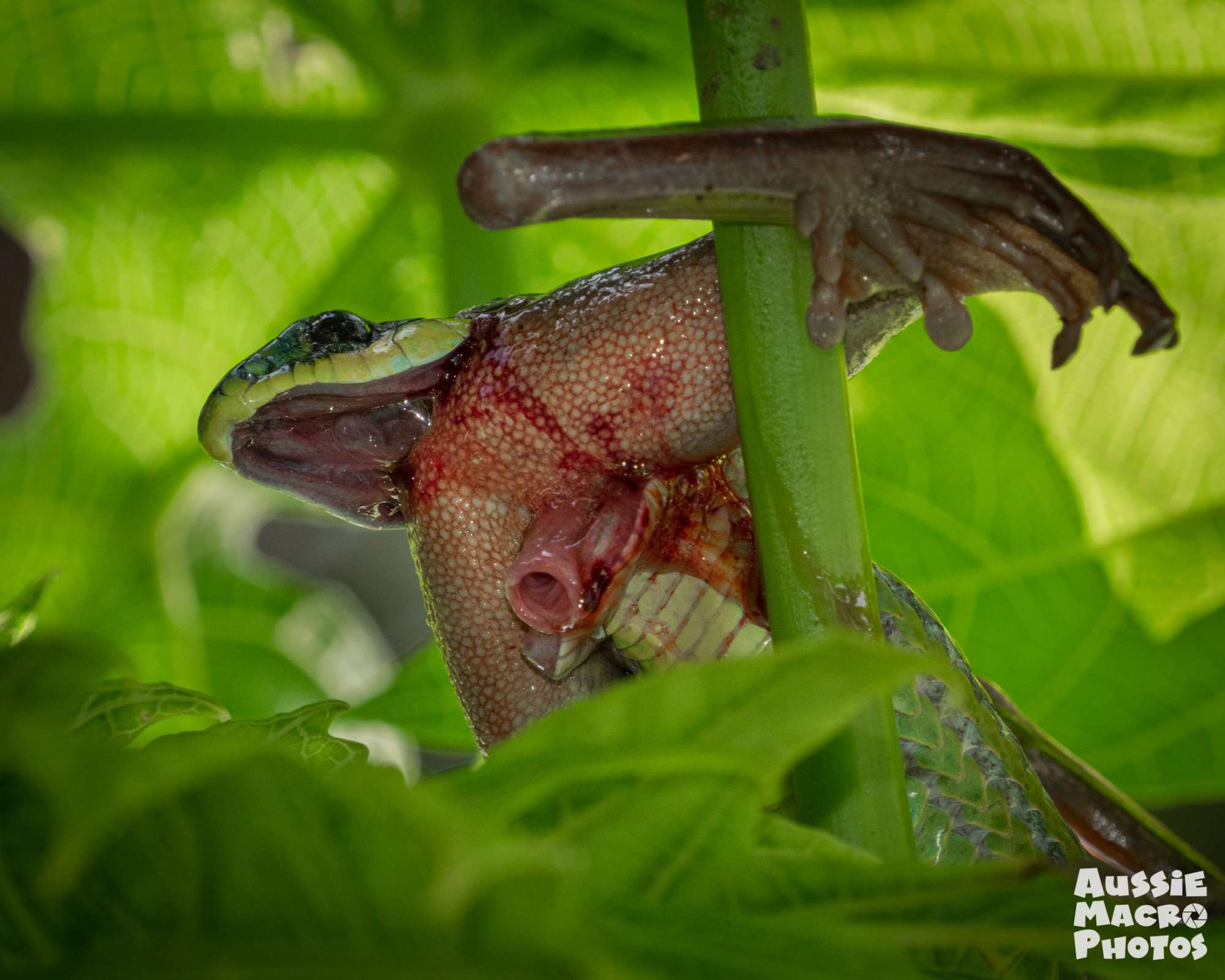 Saturday 29th October Let’s Go Buggin will run a Special Halloween Night walk.  Two sessions, one at 6 pm for younger families and another at 7 pm.  Use ‘blog’ as the coupon code for 20% discount on your tour booking.